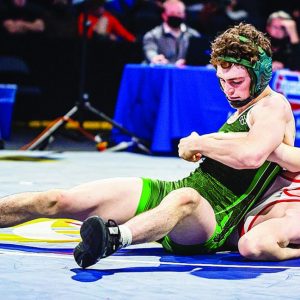 Meanwhile, the journey is only beginning for Dragon 106-pound freshman Gage Gross.

“I am very proud of how Dalton ended his season,” Ste. Genevieve head coach Jared Bonnell said. “I only wished he could have ended it the way he wanted, as a state champion. I know he gave everything he had.”

“Gage won two come-from-behind matches at state to secure a place in the top four,” Bonnell noted. “He also almost pulled an upset in his semifinal match. Gage has a lot of talent, and he needs to keep working to be a dominant force in the lighter weight divisions.”

McNeal, by virtue of being a sectional champion, drew a first-round bye. He then recorded a defensive 4-0 decision over Pleasant Hill’s Dalton Coe.

Eventual state champion Keith Ransom of Mexico earned a 4-0 decision over McNeal. Sullivan’s Dillon Witt won by decision in the third-place match, another 4-0 outcome. All three of McNeal’s bouts resulted in the same score, an oddity for sure.

Gross opened up his tournament trail with a third-period pin over Nevada’s Kynndrick Brooks. Then he recorded a thrilling 8-6 sudden victory over Gage Lock from Helias Catholic (Jefferson City).

In the semifinals, Monett’s Simon Hartline scored a 12-8 decision over Gross, despite Gage nearly pinning Hartline late in the bout. St. Clair’s Ryan Meek recorded a 16-0 technical fall in the third-place match (it was stopped at the 3:00 mark).

Other Dragon wrestlers had some success, and Ste. Genevieve tallied 44 points altogether. That resulted in a 14th-place finish in a Class 2 field with 44 scoring teams.

“We are not particularly satisfied with 14th as our team finish,” Bonnell said. “I didn’t think we wrestled very well overall, and I know the team felt that way as a whole too.”

With Bonnell entrenched as coach for many seasons, he has high standards for a program that deserves to be in conversation with the likes of state champion Pleasant Hill, Monett, Helias and Cameron.

In the heaviest two weight groups, including 220, the Dragons had some modicum of success; however, Ste. Genevieve didn’t reach the podium.

But, Alex Meyer from St. Charles West recorded a 2-0 decision over Propst in the consolation semifinals. Still, Propst is a two-time state qualifier.

Also a two-time state qualifier is Ryan Schmelzle, who earned a 6-1 decision over Michael Sanner from Helias in the opening round.

However, Harrison Merriman of Monett and Eben Crain of Reeds Spring both pinned Schmelzle in the opening period, with respective times of :38 and :42.