Each girl saw the spotlight, being on the podium for the closing ceremonies.

They also brought home a medal as a sign of their dedication and determination in the growing sport of girls’ wrestling.

“Our coaching staff was very happy to see our girls earn medals at the state tournament,” Ste. Genevieve head coach Jared Bonnell said. “Placing makes all the long, early morning practices worth it.” 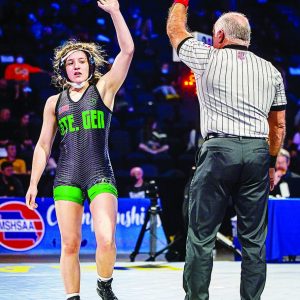 What’s more, these two girls combined for 20 points in the team standings, which helped the Dragons tie Springfield Central, a school with a decidedly larger enrollment, for 20th place.

Keep in mind, this was just Basler’s second season on the mat — and she’s already developed from a state qualifier to a state placer.

Because she was a sectional champion, Basler earned a first-round tournament bye — which placed her in the quarterfinals.

Basler earned a second-period pin over Chase Kiel of Kansas City Staley at the 3:50 mark.

The problem for Basler was she ran into a machine during the semifinals, pinned by eventual state champion Nonnie Justice of Harrisonville in 3:15. Justice went through the entire season undefeated with a 44-0 mark.

Bailey Joiner, of Lebanon, pinned Basler in the third-place match at 4:59. Still, Izzy finished the season with a 29-8 mark.

“She spent some time that last couple weeks (of practice) working on getting her best shots and working counter offense,” Bonnell noted. “This is something we will continue to work on in the offseason.”

Myracle showed the same resilience she possessed during the all-class sectional meet at St. Clair — rebounding from an early tournament loss to have success.

Disappointingly, Myracle was relegated to wrestle-backs after losing an ultimate tie-breaker 8-6 versus KayLyn Munn of Platte County.

The ultimate tie-breaker lasts for 30 seconds, with the first wrestler to score deemed the winner.

Myracle then proceeded to win her final three matches — finishing the season with a 34-3 mark.

One last time in 2020-21, Myracle squared off against conference foe Brooke Bennett from North County in the fifth-place bout. Maggie pinned Bennett in 4:40.