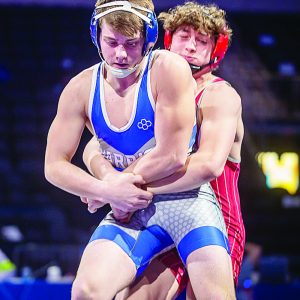 After all, back in January, Bieser became the first-ever Southeast Missouri Regional Wrestling Conference league champion for the Warriors.

“It was really exciting for me to make school history and be Valle’s first state medalist,” Bieser said in an email to the Ste. Genevieve Herald. “I couldn’t have done it without the support of my family, my coaches, my teammates and my friends.”

Leonard, a senior, was simply too much for Bieser in the championship final — earning a 22-7 technical fall. The match was stopped at the five-minute, 19-second mark.

“Leonard stayed upper body, and didn’t shoot much,” Bieser noted. “He was very good on defense, and scramble positions.”

“I couldn’t think of a more deserving kid to go out and be our first state medalist,” Gegg said.

Bieser is a case study in hard work, resilience and development, Gegg added. Especially considering Josh’s record as a freshman was 3-27. Then he become a state qualifier as a sophomore.

In the end, Bieser also finished with the most wins in a single season in Valle history (37), and pins (26) as well.

The list of accolades continues, including district champion and finally first-time state finalist — with Bieser walking in as part of the storied promenade of champions, one of the most endearing aspects of state wrestling meets.

One of the most challenging parts of competing at a state meet is facing wrestlers of different styles.

Bieser, since he placed second in the sectional round at Palmyra, began his road to the championship by recording a 9-4 decision over Dalton Staton of Carrollton.

The semifinal round beckoned, and Bieser was up to the task again, this time pinning Jaden Obongo of Brookfield at the 4:50 mark of the bout.

Gegg said Leonard’s experience was, perhaps, the ultimate factor in the state championship. Abongo had length and agility, but Bieser remained in position for points. Van Voorst had hands of stone, which meant avoiding headlocks at all costs.

Colton Kirkham of Mid-Buchanan pinned Giesler in 3:55 during a first-round 152-pound championship bout.

That sent Giesler to the wrestle-back consolations, with Lathrop’s Drystin Dotson pinning Brandon in the first period.

Regardless, Giesler collected 13 wins as a state qualifier during the 2020-21 campaign.