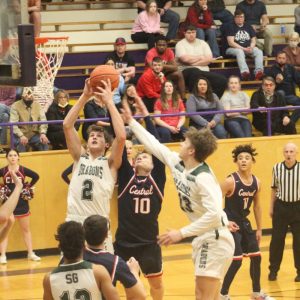 That gave Ste. Genevieve a 42-36 lead. The Dragons were comfortably ahead, right?

Park Hills Central outscored Ste. Genevieve 19-7 during the final 10-plus minutes of the game as the Rebels defeated the Dragons 55-49 in the Class 4 District 2 championship game at Potosi High School last Wednesday.

“The difference was we didn’t shoot the ball near as well from the floor, or the free-throw line,” Ste. Genevieve head coach Robert Coleman explained.

The Dragons finished the season with a record of 16-9 while the Rebels forged ahead for a sectional game versus venerable New Madrid County Central — which took place last night, March 9.

Coleman thought the Dragons handled the Rebels’ zone defense well enough to win; however, it all boiled down to shooting accuracy.

Ste. Genevieve made only 6-of-16 shots from the free-throw line, and shot 37 percent from the floor. Meanwhile, Central made good on 18-of-30 free throws (60 percent).

Coleman complimented Central on its ability to attack the basket, and the Rebels finished around the rim better than the Dragons did.

Boyer sliced Central’s lead to one point, 49-48, with 2:52 left in the fourth quarter, and the Dragons had a chance to forge ahead moments later.

However, Rebel freshman Jobe Bryant stole the ball from Logan Trollinger, dribbled rapidly up court and ultimately finished off a conventional 3-point play.

Ste. Genevieve was called for a pair of traveling violations and the Dragons missed several shots down the stretch. Even a technical foul on Central didn’t help Ste. Genevieve with Ricky Hunter making just one of two free throws.

The game was taut from start to finish, with Ste. Genevieve up 17-14 after one period of play. The Rebels were up 33-31 at intermission, and the Dragons had a 44-41 lead after three quarters.

“I think the biggest thing was our defense,” Coleman said of why the Dragons went ahead in the third. “We did a really good job against their ball screens, and not allowing them to curl us when they screened away.”

Boyer was Ste. Genevieve’s leading scorer and rebounder with 14 points and 20 caroms, respectively. Boyer was a vacuum on the offensive glass with seven boards.

Rudy Flieg contributed 13 points and 10 rebounds, also posting a double-double. Hunter finished with eight points, including a pair of treys.

Both Anthony Nash and Trollinger dished off five assists. Nash also had a team-best three steals.

• The Dragons advanced to the championship game with a 72-47 conquest over Fredericktown in the district semifinals on Monday, March 1.

“They are a great group of seniors, and this year they have stepped up in many ways as leaders,” Coleman said of the Class of 2021.

Coleman said Lea played “for the love of the game.”

Rose was a blue-collar, physical presence for the Dragons.

Trollinger ran the point for four years, showing moxie while attacking the basket and battling for rebounds inside.

Nash was an engine and brought speed and aggressiveness on defense.