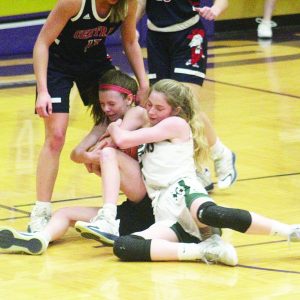 But, the Dragons never found the desired results.

That’s because Park Hills Central bolted to a 15-6 lead by the end of the first quarter, forcing Ste. Genevieve to play what proved to be a fruitless game of “catch up.”

In the end, the Rebels defeated the Dragons 64-52 in the Class 4 District 2 championship game at Potosi High School on Thursday evening.

Ste. Genevieve finished the season with a record of 18-6, while Park Hills Central (18-5) ventures to New Madrid County Central for a sectional round contest.

Marysa Flieg made two free throws, slicing Central’s lead to 45-40 with 7:02 remaining in the fourth quarter. The Dragons had another possession to chisel the Rebels’ margin even further, but recorded a turnover.

“We tried to claw our way back several times and just couldn’t get it any closer than that,” Ste. Genevieve head coach Jordanna Walk-Robison said.

Central opened the game with a 10-0 run, and Jessica Hulsey sank a 3-pointer from the baseline for that nine-point edge after one.

Ste. Genevieve kept chiseling. Megan Aubuchon scored inside the lane to bring the Dragons within four, 17-13, at the 5:49 mark of the second period. However, Central was ahead 30-20 at intermission, capped by Aubree Eaton’s dribble drive for two.

Central’s lead was as many as 13 points in the third quarter after Kaley Kimball converted a traditional 3-point play followed by another finish inside.

“Kimball made some baskets that stopped our momentum (throughout the game),” Walk-Robison noted.

The Dragons finished the game with eight 3-pointers, but it wasn’t enough to counter either Sophia Horton with 22 points and Kimball’s 18.

Central made hay inside the lane, through scoring and rebounding. That was the ultimate difference in the contest.

This was a remarkable season in the rivalry between Ste. Genevieve and Park Hills Central, with the Dragons recording their third consecutive Mineral Area Activities Association Large School Division title in a regular-season conquest over the Rebels.

“This group of seniors had a love and passion for the game of basketball,” Walk-Robison said. “From day one, they brought that to every practice and every game. They were willing to do whatever I asked, and made us a better team.”