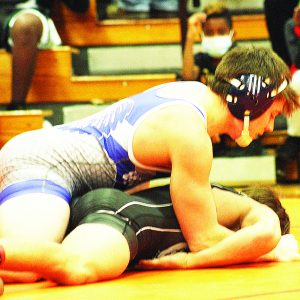 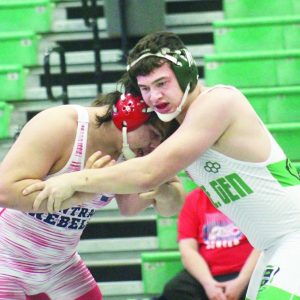 Gage Gross, Bryant Schwent and Ethan Ogden are all first-time state qualifiers for the Dragons.

Both Ste. Genevieve head coach Jared Bonnell and Valle Catholic’s Jacob Gegg are eager for their teams to compete at a new venue.

Due in part to the COVID-19 (coronavirus) pandemic, MSHSAA moved the state meet from Mizzou Arena in Columbia to Cable Dahmer Arena — a one-bowl 5,800-seat multi-purpose facility that opened in November 2009.

“I’m just excited for the state tournament,” Bonnell said. “We could wrestle in a parking lot, and I would still be excited. It will be a little different not wrestling in Columbia, but it’s a business trip. We’re not there for anything else but wrestling.”

Gegg said, “I think it’s great to see a new venue. It’s smaller than Mizzou Arena, which may help lessen the nerves.”

Here’s a rundown on each day of action.

Josh Bieser compiled an exemplary record of 34-5 this season en route to a conference title and second-place sectional finish in the 145-pound weight division.

“It’s good to see him back this year,” Gegg said. “Being there a second time can be a little more comfortable for wrestlers. I think last year he was just happy to make it. His goal is to come home with some hardware, with the ultimate goal to win a championship.”

Bieser will be looking to write history, with the opportunity to become the Warriors first-ever state medalist.

Giesler wrestled his best late in the season, finishing with a 13-13 record.

“I think his realistic goal is to wrestle to the best of his ability, and hopefully win a few matches,” Gegg said of Giesler. “He’s getting better every single day.”

It helped that Bieser and Giesler are in compatible weight classes, and they were able to train against each other last week.

All three of Ste. Genevieve’s sectional champions, Dalton McNeal, Dale Propst and Bryant Schwent — based on their performance at Peggy J. Johnson Gymnasium on Feb. 27 — have drawn first-round byes.

McNeal piled on 35 wins during the 2020-21 campaign, crossing the ultimate benchmark for a scholastic wrestler — a 100-plus win career.

He recorded an 8-2 decision over Pleasant Hill’s David Rivera for fifth place at state last year, competing at 120. Dalton has bumped up one weight this year — to 126.

Propst put together an outstanding season, with a 17-4 record, and Schwent was 25-9. Dale has state-tournament experience, competing at 182 a year ago with one win (a medical forfeit), while qualifying this year at 220.

Bonnell is confident Ste. Genevieve can bring home some medals — and maybe more.

“I feel like we are really starting to hit our stride, and hopefully we will wrestle our best tournament of the year here,” the coach commented.

Bonnell hopes both the Dragons’ quality and quantity will yield points. From a historical perspective, Ste. Genevieve has placed as high as third overall at state (both boys and girls).

There were three medalists last year, McNeal, Gavin Gross and Jacob Dickens, who placed fourth after losing a 7-2 decision to Moberly’s Zach Lewis.

Gavin Gross has bumped up from 113 to 132 this year, putting together a stellar 26-6 season. He recorded a 6-4 decision over Mexico’s Bryan Juarez for a fifth-place medal during the 2020 state meet.

Like Gavin, Gage Gross also has accumulated 26 wins this season.

“We pretty much focus on letting them know that we are proud of them, and it’s just another match,” Bonnell said. “We want them to wrestle well, but we want them to have fun and enjoy the experience.”

Nathan Selby (138), along with McNeal and Kaleb Myracle, provided senior leadership this season. Selby comes into the state meet with a 25-13 record.

Like Selby, Levi Wiegand (152) fought back to earn third at the sectional meet. Wiegand compiled a 21-14 mark during his junior campaign.

Ogden enters the state tournament with a record of 28-11, and returning state qualifier Ryan Schmelzle (heavyweight) registered 29 wins against 10 defeats.

Every wrestler at the state meet is seasoned. All of your opponents are truly worthy adversaries. And that’s the message Bonnell has gotten across to the Dragons.