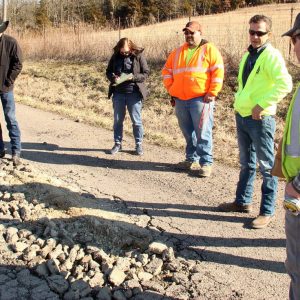 As winter melts into spring, road work is looming ahead for Ste. Genevieve Country road crews.

Road and bridge foreman Scott Schmieder shared a list of roads that need repair with the county commissioners during their meeting last Thursday.

Many of them only have one or two spots. Blum Road has as many as 10 spots, Schmieder said, while French Village Road has four.

Schmieder estimated that it might take about a month to take care of all the fixes.

It had already been agreed, though, that fixing the crumbling Lawrenceton Cutoff Road is the first priority.

In fact, the commissioners and Schmieder met with representatives of Jokerst,inc. and Vern Bauman Contracting, the most frequent bidders on county road products, to examining Lawrenceton Cutoff on March 2.

They examined some of the worst spots and discussed how best to address the repair. The road and bridge crew will dig out the bad spots and redo the base, while the winning bidder will overlay it with asphalt.

Presiding Commissioner Garry Nelson stressed that he wanted to make sure both firms were on the same page with what the county wanted done and that the bids would be for identical projects.

They also visited Gillespie Road and examined the intersection of Roth Road and Highway Y.

They hope the  Missouri Department of Transportation (MoDOT) may be willing to work with them in improving the intersection. Traffic turning off of Y, onto Roth Road faces a sharp turn and an immediate steep hill.

They discussed possible ways to address the issue with both Bauman and Jokerst personnel. Two days later, they left a message for MoDOT area engineer Brian Okenfuss, hoping to make an appointment to visit the intersection with him in the near future.

Meanwhile, the commissioners approved purchase of a new dump truck bed and spreader bed from Viking-Cives in Morley, Missouri, for $70,802.

They also gave approval to a $7,005 repair bill to fix the department’s tar pot or oil distributor.

“You’ve got to have  it,” Second District Commissioner Randy Ruzicka said.

Schmieder noted that the last time it had to be repaired, it was about an $18,000 job.

Oak Hill Road also came up. It was agreed that it is currently too narrow and in need of better ditches before it is a candidate for paving. It also needs a turnaround area at the end, either an 80-foot circle, or a three-point rectangle.

Schmieder also said he met with Citizens Electric Corporation about  setting up an electrical outlet on a pole near the county quarry. He would like to be ale to plug a block-warmer into it to make equipment easier to start in cold weather.

Schmieder reported if the sheriff’s department uses it also, it would have to have two “drops” attached, since the block-warmer would use 220 electric, while the sheriff’s needs would be for 110 power.

• It was reported that beavers are again building damns along Holst Road, by the spillway.

• The virtual public meeting for landowners concerned about the Wabash Valley’s  planned  69,000-volt transmission line that would run 19 miles, through the northern and western part of the county will be  at noon, arch 16, with a land line telephone conference that evening at 6 p.m.

•  The commissioners voted to allow all-terrain vehicles and utility vehicles to use county roads for  the annual Spring For Down Syndrome event in June.