The Warriors finished the season with a 20-9 record; meanwhile, Campbell (23-4) will play Norwood at 1 p.m. Thursday in the Class 2 state semifinals at JQH Arena.

“Campbell finished some shots around the rim and seemed to have an answer on the offensive end most of the night,” Valle Catholic head coach Tyler Search said. “They are also good when they have a lead late in games.”

Aiden Heberlie scored on a follow with 7:12 remaining in the fourth quarter, cutting the Camels’ lead to 51-47.

Heberlie had a chance to complete a conventional 3-point play on this possession; however, his free throw dinged off the side of the rim.

Valle Catholic had another chance to slice Campbell’s lead even further, but it simply wasn’t meant to be.

“I thought we definitely had some chances to get it to a single-possession game,” Search noted.

Both literally and figuratively, the Warriors couldn’t get over that Camels’ hump.

It marked the end of a stellar virtuoso career for Valle Catholic college prospect Carter Hoog, who capped it all off with 30 points and six rebounds. 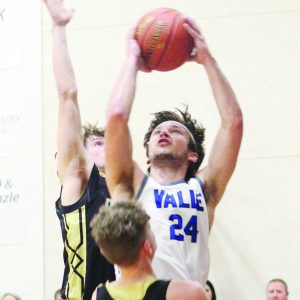 Hoog knocked down seven 3-pointers as part of a 30-point performance.

“Carter did what Carter has done pretty much all season,” Search said. “I’m tearful I was able to coach him over the last four years. His growth and development has come directly from his work ethic. He always wanted to improve his game.”

The Warriors opened the game in fine fashion with a Chase Fallert 3-pointer from the key giving his team a 9-0 lead at the 4:17 mark of the first quarter.

However, by the end of the first frame, Campbell had overcome that deficit for a 12-9 lead. The Camels built their margin through the second quarter, with a 30-23 margin at the break.

Campbell had double-digit leads three times during the third quarter. Hoog made a 3-ball to whittle the Camel edge down to four points after three, 49-45.

Valle Catholic was forced into fouling as time ticked away in the fourth quarter, and Campbell made enough free throws to prevail.

The Warriors’ chances of winning were diminished when Fallert suffered an unspecified injury just before halftime, Search explained.

Fallert had been guarding dangerous Campbell guard Blake Fowler, who paced the Camels with 23 points on nine field goals and 3-of-5 from the free-throw line.

“Fowler is very quick off the dribble, and that’s what makes him so tough to guard,” Search said.

Fallert also had been complementing Hoog well on offense for the Warriors, and he finished with 15 points. Heberlie was Valle Catholic’s top rebounder, grabbing 12 caroms. Sam Drury added six points and seven rebounds.

• Senior Cory Stoll in his final two games versus Campbell and Crystal City had 14 points, six rebounds and four steals.

• In the win over Crystal City, Heberlie tossed in 17 points and pulled down 18 rebounds as part of a double-double. Hoog also dished off eight assists. Fallert had a game-high three assists.

• Valle Catholic and Campbell each had a limited amount of tickets available for the Class 2 quarterfinal game. Still, it was standing room only in the Valle gymnasium, and both student sections sat atop the stage.

• This marked Valle’s deepest playoff penetration since the 2014-15 season, when the Warriors lost to Scott County Central 70-62 in the Elite Eight.