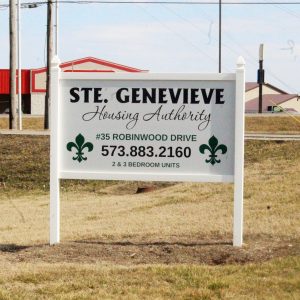 Lining Robinwood Drive in Ste.  Genevieve is a series of modest brick-covered homes.

It’s just like any other neighborhood in the city, complete with people relaxing on their front stoops, speed bumps on the road – and a central office.

These homes were created as part of the Ste. Genevieve Housing Authority (SGHA), with Gina Bryant as executive director.

Community development administrator David Bova presented an annual report to the Ste. Genevieve Board of Aldermen on Feb. 11.

And that’s not the only housing-related matter elected officials and city employees have discussed recently.

The Perryville-based Southeast Missouri Regional Planning Commission commissioned the study, which examined all sorts of housing statistics, on behalf of the Ste. Genevieve Industrial Development Corporation — an arm of the Chamber of Commerce.

Welch wanted to show the board of aldermen yet another detailed report indicating what most everyone in Ste. Genevieve already knows.

There is a lack of available single-family homes in Ste. Genevieve, and the housing authority has a lengthy waiting list, as noted in the annual report.

Generating housing starts for all income levels should be a front-burner issue in the city, especially noting that currently only 5.5 percent of 2,001 units are vacant, according to the study.

The rest of this piece will examine both SGHA’s annual report to the city – and that housing return on investment study.

The mission of the SGHA is “to ensure safe, decent, and affordable housing for all eligible families and individuals,” as stated in the annual report.

The housing authority consists of a five-person board of commissioners, with Melissa Otto as chairwoman, Bova serving as vice chair and members Sue Zerwig, Becky Welch and Pixie Clanton. Becky Welch is the wife of the city administrator.

“The goal is to improve the living conditions for low, very-low and extrmely-low income individuals and families at an affordable rent,” Bova said.

Happy Welch acknowledged more of this type of housing is needed; however, whether federal funding would be available or not is the big question.

Bova covered a series of statistics related to the development, which includes 16 buildings, 30 units and a main building that comes complete with office, community room and maintenance area – built in 1985.

The report highlights a total of 94 residents, and as of Dec. 31, 2020, all 30 units were occupied. The authority had 16 families on a waiting list as of this past January.

In 2020, SGHA approved 14 new admission families, of which 11 were under the extremely low-income limit.

Rents are fairly priced, as indicated in the report. In fact, the authority is required to set flat/ceiling rents at no lower than 80 percent of what’s termed a Fair Market Rent (FMR).

The flat/ceiling rents were reported as follows: A two-bedroom unit has a monthly rent of $383 and three-bedroom at $575. Residents are given the choice of either a 30 percent adjusted income rent or flat/ceiling type.

“These units are geared toward families and senior citizens,” Welch said. “These people are important part of our workforce. These people can’t afford (normal) rents or monthly mortgage payments. We need something like this.”

Bova outlined that all of the housing authority properties are inspected annually by the staff — plus the HUD Real Estate Assessment Center (REAC), which ultimately provides the development a yearly score.

The authority received capital funding for some moderization work, including four new parking spots, repainted shutters, three refrigerators were replaced by the staff, and new gutters were installed on all buildings. The capital fund grant totaled $68,736.

The SGHA, which is exempted by Missouri law from local taxes, was granted CARES Act funding in the amount of $16,606 due to the COVID-19 (coronavirus) pandemic – which allowed the community room to be updated with new tables, chairs, shelves and computers, plus new security cameras throughout the development.

The community room is used by residents free of charge, and serves as a hub of activity.

Welch presented the Housing Return on Investment Study as a means of “information gathering” for the board of aldermen.

So just as the city needs more low-income housing, middle and upper class folks looking for a home in Ste. Genevieve (population 4,444) are oftentimes out of luck.

The lack of vacant units in both Ste. Genevieve and Bloomsdale is staggering. St. Mary was not a part of the study. Other locations included were Desloge, Fredericktown and Perryville.

As Welch noted in a telephone interview with the Herald last Friday, Ste. Genevieve’s last major housing development was Valle Springs in the 1990s. There are still a handful of lots available to build in this neighborhood.

The numbers were based on figures from the 2019 American Community Survey (ACS), part of the United States Census Bureau.

The findings also show owner-occupied people have a much higher median household income. The average owner-occupied income was $60,568 as opposed to the renter-occupied figure of $33,867.

Bloomsdale’s statistics are eye-popping, with only four vacant units in a community with a population of 713 and 294 overall housing units. The median value of a home is much greater here than Ste. Genevieve, at $173,900.

Additional Bloomsdale numbers, there are 223 owner-occupied units, which produces a 77 percent rate.