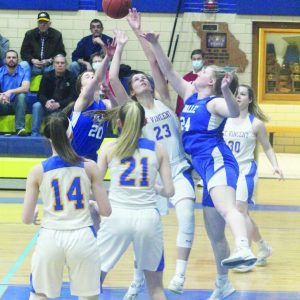 However, St. Vincent had a little more depth then Valle Catholic — and the Indians outscored the Warriors 7-2 during the extra frame en route to a 52-47 victory on Wednesday in the Class 2 District 3 semifinals.

The playoffs are finite, a lesson St. Vincent later learned as Oran eliminated the Indians from the postseason with a 55-28 conquest on Friday evening.

First-year head coach Brian Bauman squeezed every drop of talent out of the Warriors this season, finishing with a record of 10-16.

Valle Catholic’s season was filled with ups and downs, and injuries to key players Riley Siebert and Bryna Blum.

“This year was interesting and challenging to say the least,” Bauman recalled. “Losing a good chunk of our committed roster prior to the season, then losing our top scorer at the time (Siebert) and later top 3-point shooter (Blum) was one gut punch after another.

“Credit to the remaining girls,” Bauman continued, “they battled with all their hearts, and down the stretch, we were playing our best ball of the season. I’m very proud of our improvement and the girls’ resolve.”

Count Christine as one of those players who improved throughout the season, and she scored double figures twice during the playoffs — including 14 versus St. Vincent. She also had eight rebounds and two steals.

Hannah Fowler became Valle Catholic’s go-to player, and she paced the Warriors with 15 points, including a spotless 7-of-7 from the free-throw line, 11 rebounds for a double-double and two steals.

St. Vincent’s Hannah Riney scored inside the lane to give the Indians their largest lead of the game at 29-16 with 4:26 remaining in the third quarter.

That’s when Valle Catholic went to work, chipping away at St. Vincent’s lead like a whittler paring down wood. The Warriors flipped the score the rest of the way, 29-16, to force overtime.

Valle Catholic recorded turnovers on its first four possessions during overtime, including a three-second violation.

Meanwhile, St. Vincent’s Mary Schwartz — the game’s leading scorer with 17 points — canned a 3-pointer to put the Indians ahead, 48-45. They added four more free throws, including two from Genevieve Lipe, to win the game.

Bauman said, in the end, the girls needed more breaks, and he tried to accomplish that through calling timeouts. St. Vincent ran a man-to-man defense Valle Catholic had to adjust to, the coach added.