Enjoying home cooking, the Dragons will send nine wrestlers to state based on their performances at the Class 2 Section 1 meet at Peggy J. Johnson Gymnasium.

“We are happy with Saturday’s performances,” said Ste. Genevieve head coach Jared Bonnell. “We had several wrestlers elevate their level of competition, and put together a good tournament.”

Valle Catholic wrestlers Josh Bieser and Brandon Giesler qualified for state at the Class 1 Section 1 meet at Palmyra High School — which was a two-plus hour drive one way for the Warriors.

“I think it’s a good confidence boost for Josh to continue to add accomplishments to his wrestling career,” Valle Catholic head coach Jacob Gegg said. “He is only the third multi-time qualifier in our program’s history. Brandon has showed incredible growth over his first season.” 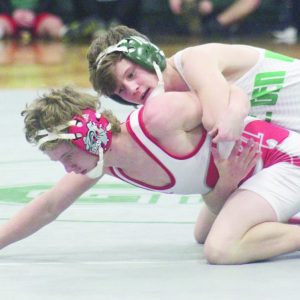 “All three of these wrestlers worked hard, and believe in the process and sacrifice it takes to be a champion,” Bonnell said. “They all knew what they had to do to win their matches, and it was as simple as going out and executing.”

Schwent (25-9 individual season record) registered a pair of takedowns before eventually pinning St. Clair’s Creek Hughes at the 3:18 mark of the championship bout.

McNeal had a tougher match; but, he secured a 7-5 decision over Dillon Witt from Sullivan. That was only Witt’s second loss of the entire season while McNeal improved to 35-5 — piling onto his career triple-digit career victories at this juncture.

Propst applied lessons learned from a loss to Park Hills Central’s Austin Carver in the District 1 championship two weeks ago.

Carver pinned Propst in just 0:26; but, the outcome was considerably different this time around.

Propst didn’t allow Carver to mount any offense, earning a 7-0 decision and bettering his season record to 17-4.

Schmelzle came closest to winning his match. Ryan earned a late third-period escape point. In the waning seconds, Schmelzle attempted a move, but the two-man officiating crew determined no points would be awarded.

Nathan Selby (138) and Levi Wiegand (152) both advanced to state with bronze-medal finishes.

Bonnell noted third-place matches mean a whole lot more since only the top-three from each sectional would qualify.

Selby pinned Dexter’s Jacob Medler at the 3:28 mark, while Wiegand jumped for joy after recording a 9-6 decision over Park Hills Central’s Colten Bess — who had pinned Levi in the third period at the district meet on Feb. 13.

Wiegand (21-14) has enjoyed a memorable year, also qualifying for state in cross country. Selby (25-13) has been a senior leader for this group of Dragons.

Three other Ste. Genevieve wrestlers saw their seasons come to an end, with Nich Wirick at 120, Kaleb Myracle 160 and Gabriel Willett 195.

The most-ever Dragons to qualify for state in one year in 13, Bonnell noted.

Centralia’s Brayden Shelton proved too much for Bieser, recording a pin at the 2:33 mark. Still, Bieser is a two-time state qualifier entering the gala event with a stellar 34-5 record.

Giesler (13-13) showed plenty of guile, winning back-to-back matches with first-period falls to wind up with third place. He pinned Will Graves of Father Tolton in just 0:24, and followed that with a fall in :44 over Gabriel Canonico from the Missouri Military Academy.