ST. MARY – Descendents of Moses Riney and others gathered at Immaculate Conception Church on Feb. 23 to honor a special man’s memory.

The Moses Riney Art Festival paid tribute to a man born a slave, who fought to end slavery during the Civil War, then died a respected citizen of his community.

Moses Riney was born into slavery in 1844, growing up in Perry County as property of Thomas Riney. Riney’s 1858 will lists the 14-year-old Moses’ value as $900.

After President Abraham Lincoln issued the Emancipation Proclamation, Riney was able to escape and join the Union Army, with Company C Regiment 68 of the U.S. Colored Infantry during the Civil War. He was later promoted to the highest rank a black soldier could achieve, a corporal.

After serving for more than two years and being involved in five battles during the war he returned home in 1866 – probably without the fanfare the white veterans received.

Riney married Mary Burgette, who had also recently been freed. After about 16 years, they bought a farm in the St. Mary area, not far from Riney’s former master. They had 13 children. The couple later moved into the city of St. Mary and found a welcoming place at Immaculate Conception Catholic Church. 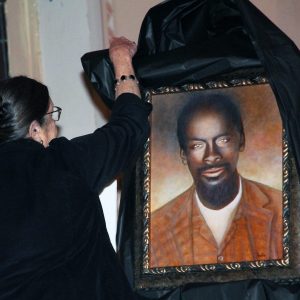 In fact, as many noted at the festival, he received a tribute remarkable for the time and place in his February 1921 obituary in the St. Mary newspaper.

According to his obituary in the Feb. 25, 1921 St. Mary’s Review, Riney “had no enemies and was respected by the whites and the colored people.”

The event, spearheaded by Greg Elder, was originally scheduled for Feb. 16, the 100th anniversary of Riney’s death. Inclement weather forced its postponement.

A good crowd attended, with several descendents joining area artists who did works based on Moses Riney and his life.

They all agreed that working on the projects was an eye-opening experience.

Elder, in his welcoming remarks, said that Riney had lived “a remarkable life” in “a welcoming community.”

Elder said that in studying history such as the Moses Riney story, “on first glance, you look at the bad and the second part is to find bright spots.” 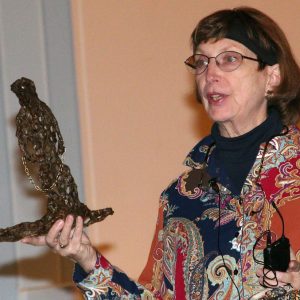 “We have to know about our past in order to fully understand our future,” Elder said.

He noted that Webber had been mortified, seeing the prices placed by Moses and his siblings’ names in that 1858 will when she researched her book.

She had also said that she believed her ancestors taught family members to read – something actively discouraged during slavery and not very common for blacks in the late 19th and early 20th centuries.

Elder said that Webber remarked that “When  she dies, the first thing she’d going to do is run, hug her husband, then shes going to make a beeline to Moses.”

Various speakers shared how inspiring Moses Riney’s story was to them.

Michael Schaaf of the Sons of Union Veterans of the Civil War,  said it was a story of “understanding and faith” and of “the will of man” to persevere. He also wondered aloud how Riney emotionally got past the degradation of being monetized “like a piece of property.”

“How do you forgive all that and build a life?” Schaaf asked.

Karl Schultz, a city alderman who was also representing the Immaculate Conception Preservation Society, called Riney “a man of remarkable courage,”  and said he was “super pleased” to be holding the event in the historic church. He also read a proclamation by Mayor Carlton Wyatt that had made Feb. 16 “Moses Riney Day” in St. Mary.

Members of the Sainte Genevieve Art Guild unveiled works they had made to honor Riney.

Carolyn Bach, guild president, explained how her original plan of making a wood sculpture of a thankful Moses Riney, lifting up his hands later in life.

That, however, did not happen.

“A lot of artists will tell you that when you’re working on a piece, sometimes it has a mind of its own or a spirit,” she said. “After several hours of frustration, I walked away. Then I held it in my hand and what it was saying was ‘I’m worn; I’m broken; I’m empty, and I’m hollow.’”

“This was a man in despair,” she said.

Therefore she did a wood sculpture depicting young Moses in slavery.

Michelle Spencer unveiled paintings of Riney as a Union soldier, with his comrades. Brenda Thompson unveiled “Moses at 21” and “Sons at War,” a pair of paintings depicting his wartime service. She also did a painting of Immaculate Conception Church as it looked in the late 1800s. Anita Alsup, meanwhile, unveiled a striking portrait of Moses Riney, based on the only existing photograph of him, from a late 19th-century tin type.

Among the dependents to share thoughts was great-great grandson Brant Riney.

He said he appreciated “all the beautiful presentations” of art that were obviously “done from the heart.” The fact that they were done to honor  “a person who is not worldly famous or anything” made it especially meaningful.

In his closing remarks, Elder told about another Moses, St. Moses the Black, an Ethiopian desert monk who lived about 330 AD and managed to convert many desert thieves to Christianity.

He also suggested that perhaps the Riney festival could be held again in 2022.

The art will be on display at the art guild’s art center and museum through the end of March, 11 a.m.-4 p.m., Fridays and Saturdays.