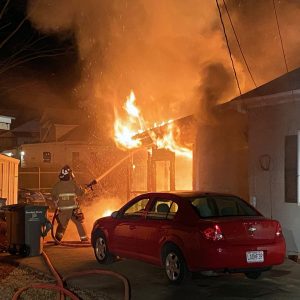 Fire blazed through a rear porch on a house in the 600 block of Market Street in the early morning hours of last Wednesday.

The Ste. Genevieve Fire Department received a call of a structure fire at 1:30 a.m., Feb. 24. Zell Fire and St. Mary fire departments were also dispatched to assist, due to automatic mutual aid agreements.

“The first fire officer on the scene found SGPD had the area secured and traffic blocked,” Ste. Genevieve fire chief Kenny Steiger told the Herald. “Arriving at the fire, heavy fire was found on a rear attached porch. The fire was under control by the time mutual aid departments arrived, but units remained on scene for two hours.”

Steiger indicated they spent that time making sure the fire did not revive or spread.

The house itself did not catch fire.

“The majority of the fire was confined to the back porch,” Steiger said, “but the inside did suffer smoke and water damage. The cause of the fire is believed to be an electrical in nature.”

Firefighter Felix Meyer, who is also the county emergency management director, noted at last Thursday’s County Commission meeting that the Zell Dire Department had used air packs that had been obtained with a grant recently.