After tabling the issue for a month, the Ste. Genevieve Heritage Committee approved a requested certificate of appropriateness  to construct a deck on the front of the house at 419 Roberts at the Feb. 22 meeting.

The contractor had been unable to attend the Jan. 22 meeting and the commission members preferred to wait until he could answer a few questions before deciding on the project.

Lee Ann Waldvogel asked whether there would be steps coming off the deck, and in which direction.

Lewis said it would have steps.

“Everything will be recessed-in,” he said, explaining that it will come from the front, toward the sidewalk.

The circa 1925 Craftsman bungalow has an offset, partially enclosed shed-roofed porch stoop. The proposed deck would wrap around it.

The commission’s senior member, Frank Myers, addressed the importance of the house.

“That’s a very important little house that you’re occupying, because the block is very important,” Myers said. “The house directly across from it, as you probably know, is a vertical log house that has been historically restored, and several of the other buildings in that block probably have at their core have vertical log structures. At least that’s what some prominent architects have stated … We’ve got to be careful about the appearance … You’re taking on a difficult job, there, with a small lot and not a great deal of space. I can appreciate it’s not an easy job to come up with drawings.” 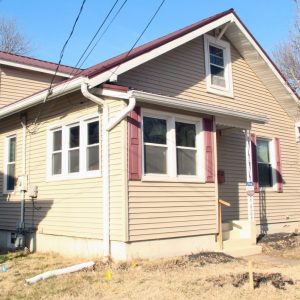 Myers also asked whether all of the exposed lumber will be planed and coated. Lewis said it would be treated and said he would not advise painting it now because it is pressure-treated lumber.

Myers specifically asked about the deck surface and the railings.

“At this point it is pressure treated and I don’t advise anyone to paint over it for several months,” Lewis said. “Otherwise I know it rots inside out.”

He confirmed that there will be a railing around the porch, with lattice work below.

“I’ve thought of different options,” Lewis said. “At first he  (Roberts) wanted steps that go right to the city sidewalk.”

Lewis said he told Roberts that would not work. Lewis added that he would make the deck smaller if he were building it for himself.

“The steps are going to come up to the sidewalk, but not over it?” Waldvogel asked.

“Correct,” Lewis said. “You’ll have four feet. Everything will be four feet away from the city sidewalk.”

Myers noted that the dimensions on the drawing do not add up. Lewis said he had noticed that.

Lewis explained that the owner is a disabled veteran who likes to sit on his deck and read. It is too shady to do so in the back yard, he said.

“What he’s wanting to do is alongside the house, in front of it and between the house and that tree, is to put a ramp there eventually, because sometimes he has to ride his little scooter deal,” he said.

Myers asked if there would be any light on the deck. Lewis said there is.

“He has problems stepping down from his front door to get his mail,” Lewis said of the owner. “This is why he’s wanting this, plus reading.”

Myers said he thought a light on the steps “would be appropriate.” Lewis agreed.

“I’d rather build this thing the way you prefer it,” Lewis said, adding that he didn’t want to build “anything that looks shoddy.”

The commission voted 4-0 to grant the request.

He showed potential fliers for the workshops. One is on restoring windows and one will be on siding and trim.

“We will start looking for locations here, in the next couple of weeks,” Bova said.