Tour stops were in Patton at Meadow Heights, Oran and Advance — as the “Road Warriors” conquered everyone en route to the Class 2 District 3 championship.

Valle Catholic, seeded fifth in the tournament, barreled through the competition, first topping Meadow Heights 61-47 on Tuesday, Feb. 23, then Oran in a defensive-minded game 43-40 this past Thursday and 66-56 over Advance on Saturday.

“I’m extremely proud of our guys remaining confident all week,” said Valle Catholic head coach Tyler Search. “They never stopped believing in themselves. We knew it wasn’t going to be easy, but we took it one quarter at a time like we talked about.”

In the win over Meadow Heights, the third quarter proved to be the difference as the Warriors held the Panthers to just two points — while the Warriors built a double-digit lead. 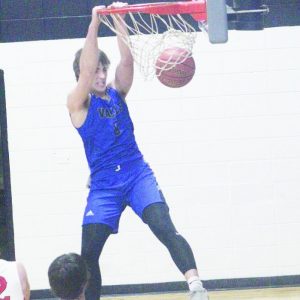 “We were able to get some key stops when we needed them most,” Search said of the come-from-behind victory over Oran. “We also shot better than them from the free-throw line, and that was a big key.”

Hoog, the school’s leading career scorer, also was clutch with a pivotal basket.

Valle Catholic rolled to a 19-point lead after three quarters at Advance, and eventually held on to win by 10.

“We took advantage of some transition opportunities,” Search said. “I also thought we wore them out a little bit with our defense.”

Under Search’s tutelage, Valle Catholic has won the district championship twice and the Warriors will be playing in March — the goal of any high school team across these United States.

Advance came into that game with 20 wins, and twice scoring more than 100 points in a single contest.

Hoog netted a game-high 28 points and Heberlie produced a double-double with 14 points and 13 rebounds to conquer Advance. Heberlie also had a crucial blocked shot at the end of the first half at Oran.