And the Section 1 Tournament had enough twists and turns to turn a pretzel green with envy at St. Clair High School this past Saturday.

Junior Izzy Basler, at 127 pounds, needed an overtime period in the semifinals to defeat Janiah Jones of Parkway South.

Maggie Myracle, Basler’s classmate in the 195-pound division, made the road to state more difficult with a semifinal loss to Park Hills Central’s Karli McFarland — pinned at the 3:06 mark.

Both Basler and Myracle found resolve, and both punched their tickets to the state tournament set for March 9 at Cable Dahmer Arena in Independence.

The Ste. Genevieve High School girls’ program took another step toward solidifying itself as one of the premier ones in southeast Missouri. 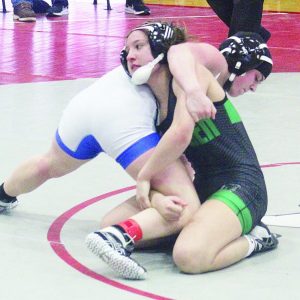 Basler and Jones were deadlocked at 11-all heading into the overtime period, with Izzy recording a takedown and pin 46 seconds into extra time.

Basler (28-6 season record) found herself down 4-1 to Washington’s McKenna Dockelman in the championship bout.

Izzy first scored a reversal for two points, and then she pinned Dockelman at the 3:27 mark for the sectional title.

“Izzy would be the first to say that she didn’t wrestle at her best,” Bonnell said. “But, she found ways to win, and that comes from pure guts and instinct. This is only Izzy’s second year of wrestling, and she continues to impress me with how determined she is.”

Myracle also had to overcome adversity in reaching state, scoring the only two points of the match to top St. Clair’s Berlyn Wohlgemuth with a 2-0 decision during wrestlebacks.

Maggie followed that by pinning DeSoto’s Hannah Eberhardt in 2:21 — with Dragon pitted against Dragon in the third-place bout. She had an easy time in the quarterfinals, pinning Marquette’s Alyssa Washington in only :41.

“Maggie showed a tremendous amount of grit coming back after losing her semifinal match to a girl she has pinned four, five times this year,” Bonnell said. “She composed herself, and was able to focus on her next match.”

Senior Autumn Basler capped her career at sectionals; however, it didn’t go her way.

Nadia Middendorf of Parkway South pinned Basler at 1:00 even in the quarterfinals, then Julia Datus of Lindbergh pinned Autumn at 2:33 in the opening round of wrestlebacks.

“Autumn has been such a joy to have on our team,” Bonnell stated. “I am so happy she decided to wrestle her junior and senior years, and she has improved. She is going to be missed dearly, and I am so thankful she took a chance on wrestling.”

The Dragons finished with 37 team points, which was good enough for 17th out of 34 schools — smack dab in the middle.

Now Izzy Basler and Myracle will do something unique during a pandemic, practicing wrestling deep into March.