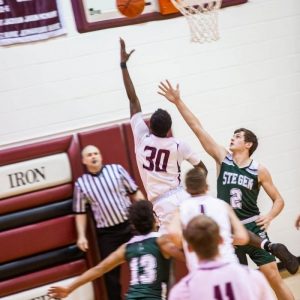 ANNAPOLIS — Both the weather and COVID-19 have joined forces as a formidable foe against any sort of basketball being played.

So that means teams are trying to fill schedules with any opponent they can find, even if it’s a Class 1 powerhouse such as South Iron.

The Panthers were simply too much for Ste. Genevieve last Friday as the South Iron downed the Dragons 86-38.

“It was nice to get a game in,” Ste. Genevieve head boys’ coach Robert Coleman. “We hadn’t played since February 2nd, and have only had a handful of practices since then.”

Coleman noted the Dragons had only one practice during a recent five-day stretch with road conditions too icy for players to convene at Peggy J. Johnson Gymnasium or the Ste. Genevieve County Community Center.

The coach hopes South Iron’s pace of play will help the Dragons, especially the state’s postseason slate beginning next week. Ste. Genevieve is a No. 1 seed for the Class 4 District 2 Tournament.

“My hope is a team of that caliber, South Iron, will make us see what we need to work on and improve,” the coach added.

Ste. Genevieve wraps up the regular season with Cape Notre Dame, playing them this past Monday, and Perryville at home.

The Dragons (14-7 record) stayed within striking distance of South Iron early, down 26-18 after the first quarter.

However, South Iron’s defense held Ste. Genevieve to single-digit outputs during the second, third and fourth quarters — and the Panthers triumphed going away.

Anthony Nash dished off a team-high four assists. Logan Trollinger was the leader in steals with three.  Rudy Flieg had a Dragon-best eight rebounds, including three on the offensive glass, to round out the team’s notable statistics.

South Iron connected on 29-of-43 field goals, for a 67.4 shooting percentage. Brock Wakefield paced the Panthers with 23 points, and Drenin Dinkins added 19.

“We were fortunate to pick up two games late,” Ste. Genevieve head coach Jordanna Walk-Robison said, “and we are still hoping we can find one more on Thursday.”

Ste. Genevieve completed the regular season with games on Monday and Tuesday versus Perryville and Francis Howell North, respectively. There was no Thursday game set as of press time for the Feb. 24 Herald.

Walk-Robison said the downtime has allowed the girls to heal up; and any game the girls can play at this point is seen as a chance to get better.

The Dragons were to have played at Festus this past Thursday; however, poor road conditions ultimately caused the game to be canceled for good.