Roy Joseph Panchot, age 89, passed away February 18, 2021. He was a loving husband, father, brother, and friend. Roy passed away due to complications from a fall.

Born in Festus, Missouri, on September 10, 1931, Roy was one of five children of Earl and Stella (nee Auzat) Panchot. After graduating from the University of Missouri-Columbia, he married Carol Grass in 1958, and the couple and their two children eventually settled in Crestwood, Missouri, a suburb of St. Louis, where they lived for 25 years. 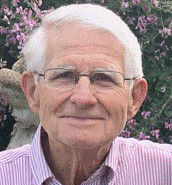 Roy enjoyed a long career in banking, including leadership positions with the St. Louis County National Bank and the Bank of Arnold. In 1987, he and Carol moved to Ste. Genevieve for his job at the former Bank of Ste. Genevieve.

During retirement, Roy became a dedicated community volunteer. He was especially proud of his work to establish and sustain the Ste. Genevieve County Community Center Foundation, and he served as its president for 15 years. For 20 years, he was president of the finance committee of the Ste. Genevieve Catholic Church. Roy’s other community service included the Rotary Club, Knights of Columbus, as well as the Southeast Regional Planning Commission in Perryville.

In addition to his parents, he is preceded in death by a brother Robert R. (Mary survives) Panchot; and sisters Martha L. (the late Keith) Lewis, and Esther Belle (the late Paul) Kane.

Roy enjoyed spending time outdoors on the family farm, especially with his son, Jeff, and his late in-laws, William and Irene Grass. Throughout his life, he was a shining example of integrity, strength, and devotion to his family, friends, and community. To honor Roy, memorials may be made to the Society of St. Vincent DePaul. A celebration of life will be scheduled at a later date.