Local dentist Dr. Blake Eyres used his profession as his opening line in introducing himself to four prospective women on the opening episode of Temptation Island.

The preface of the show is that four young unmarried couples “at a crossroads” in their relationships, come to Maui, Hawaii to be tempted by enticing singles.

“In this social experiment, four couples at a crossroads in their relationships put their love to the test by giving “single life” a try,” the show’s website explains. “On the Hawaiian island of Maui, they’ll take a break from each other while living in separate houses with sexy singles to discover if there is another partner with whom they are more compatible. In the end, will the couples leave together? Will they leave with one of the island’s ‘tempters?’ Or will they break up and go home alone? Whatever the outcome, there will be plenty of drama along the way!”

When the singles introduced themselves to the couples, Eyres’ opening line was, “I’m Dr. Blake from St. Louis and I guarantee I’ll brighten your smile.”

Eyres explained to the Herald that being on the show was not originally his idea.

“I actually did not try out for the show,” he said. “A couple of years ago a casting recruiter reached out to me on Instagram to do a different reality TV show and I went through the interview process, but ended up not doing that show. The executive producer I had my final interviews with in LA really liked me and he tried to get me to do a couple of other shows since. He called me at the end of July and asked me if I was single and if I could take off work for six weeks and then pitched the idea for ne to do this seasons Temptation Island.”

Eyres said he doesn’t know exactly what will happen with the mingling of the couples and the singles, and cannot share what he does know.

“I haven’t seen all the shows. They don’t show  us anything before they show the public,” he said. “I believe this season has 10 episodes. I don’t know, nor can I disclose how many episodes I was on, nor how long I was there. 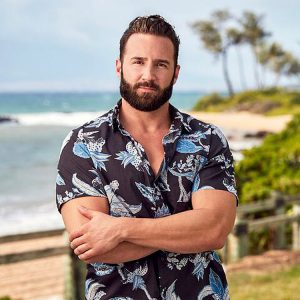 “I have a really good sense of how long I was going to be on, but it’s not something I can disclose.”

The show was filmed in October. Before it started, though, the cast members had to spend two weeks in quarantine, thanks to COVID-19 concerns. This actually gave Eyres a chance to do some homework.

“I actually had never watched the show,” Eyres said. “We had to do a two-week quarantine before we started filming. While we were in quarantine, I watched Season Two to see what the show was about.”

It was definitely different than a typical day in Ste. Genevieve – or even the St. Louis suburbs.

“It was definitely a very interesting experience,” he said “It was in a  beautiful location; Maui is absolutely gorgeous. The weather was wonderful. “It was a fun, unique experience. I learned a lot about the production side of how a TV show is made.”

The cast was more or less quarantined, or sequestered, during filming, too.

“Every day  you’re there it’s just [in a] very intense setting of being in that situation,” Eyres said. “You don’t have  any cell phones, any computers, any TVs. You have not contact with the outside world. I can’t call my parents or my practice staff can’t get ahold of me. You’re very much just in the setting of being in the island, filming the reality that you’re in and going from there.

“We didn’t even have books. They took all of our books away, too. So, there was really nothing else to do in there besides be in the show.”

GOAL WASN’T TO CAUSE DRAMA

Eyres, at 34, was the oldest cast member. The other single men raged from 25 to 30, most being in their late 20s. Eyres was quick to answer when asked whether that was a benefit or a drawback.

“I definitely think that was to my advantage, having more life experience, more experience with relationships, understanding communication better,” he said, “just a difference in maturity.”

That has showed so far in the show. While there seemed to be some direct challenges thrown between a few of the singles and couples, Eyres has tried to remain positive and nonconfrontational.