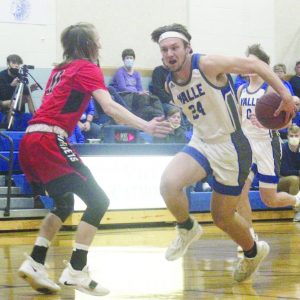 Now that’s the way to go out in your final home game.

Hoog connected on 10 3-pointers, and he was 3-of-5 from the free-throw line as part of his scoring barrage.

What’s more, Hoog got his teammates involved with seven assists to go with two steals, one blocked shot and eight rebounds.

“Carter had a performance he will remember forever,” Valle Catholic head coach Tyler Search said. “I’m very proud of what he has been able to accomplish over his career. It was a perfect way for him to go out.”

Hoog has yet to decide on what college team he will play for; but, he’s been drawing interest from local junior colleges as well as NCAA Division II and III programs.

Valle Catholic (16-8) continues building in the right direction, and Search is pleased with how the Warriors have developed this season.

“Our team has improved since the beginning of the season,” Search noted. “We have several sophomores that have grown up, and some of our young guys have now turned into leaders. Their confidence has grown over the last couple of months.”

Now the focus is the Class 2 District 3 tournament, and Valle Catholic has drawn the No. 5 seed in a rough-and-tumble group.

The Warriors played at Meadow Heights (15-8) in Patton on Tuesday evening.

The game between Valle Catholic and Crystal City featured a frenzied pace right from the very start.

Chase Fallert sank a 3-pointer from the wing to punctuate an opening quarter in which Valle Catholic established a 25-17 lead at the end of one.

The Warriors had a 21-point lead on three occasions during the second quarter, and they were up 49-30 at intermission.

Crystal City’s Carson Short and Calloway Dashner made baskets in the third quarter to help the Hornets cut the Warriors lead to 10 points twice.

However, by the end of three, and after two Hoog 3-pointers on consecutive possessions, Valle Catholic was up 74-52. The Warriors twice had a 32-point lead during the fourth quarter, and the clock ran for several stretches.

Search emptied the bench in the fourth period, and he greeted seniors Cory Stoll and Hoog with hugs along the sideline.

Sam Drury and Fallert were the only other Warriors to score in double figures with 11 and 10 points, respectively. Fallert canned two 3-pointers, and he added two steals and four assists.