Both the Valle Catholic High School boys’ and girls’ basketball teams found replacement games over the past weekend.

The Warriors met with mixed results as the boys downed Jefferson R-7, 69-58, on Saturday evening — bouncing back from Friday’s 97-69 loss to Farmington.

The Valle Catholic girls also suffered a loss to the Knights, 49-27.

Under the circumstances, with poor roads and frigid temperatures, it was simply a blessing to play on back-to-back days inside the cozy confines of Valle’s main gymnasium.

“It was good to see our guys bounce back and get a win on Saturday,” Valle Catholic head boys’ basketball coach Tyler Search said. “I’m happy we came out ready to play, and won all four quarters.”

“We were practicing on Friday when the opportunity presented itself,” the coach commented. “We knew it was a challenge. Despite being young, Farmington is talented, they were taller than us and presented a challenge for us on the boards.” 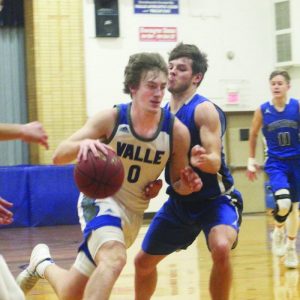 Before the varsity game versus Jefferson R-7, Valle Catholic presented senior powerhouse Carter Hoog with a basketball commemorating his 1,500th point. The ball was a mix of white and brown, with Hoog’s accomplishment written on it.

The Warriors were ahead 36-28 at intermission, and 57-46 after three quarters of play — however, Valle Catholic truly never had a comfortable lead.

Jefferson’s Colby Ott canned a 3-ball from the top of the key with 3:18 left in the fourth quarter, slicing Valle Catholic’s lead to 62-58. But, the Warriors closed out the Blue Jays by going a 7-0 run.

“I thought Jefferson shot the ball very well,” Search said. “They made 11 3-pointers, and that was something I didn’t really expect them to do.”

Hoog was the game’s leading scorer with 22 points, which also included three 3-pointers, and he dished off six assists.

Heberlie, after reporting out for basketball late, is rounding into form. He netted 12 points, blocked three shots, copped three steals, snagged eight rebounds and topped it off with a pair of assists.

Sam Drury and Chase Fallert added 12 and 11 points, respectively, for the Warriors.

Farmington established a small 15-10 by the end of the first quarter, and the Knights’ margin grew throughout the remainder of the contest.

Valle Catholic guard Mia Weiler made a free throw to cut Farmington’s lead to 21-17 with 1:31 remaining in the second period; however, that’s as close as the Warriors would get the rest of the way.

Hannah Fowler continued to shine for Valle Catholic with 14 points, including a pair of free throws, to go with four steals and three rebounds.

Editor’s Note: Read a separate story on the upcoming district playoffs on this page.