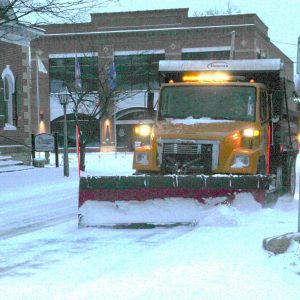 Both Ste. Genevieve County and city road crews have battled to keep roads and streets clean, but the often single-digit temperatures have made things challenging.

Salt loses its effectiveness in melting ice and snow when temperatures dip below 20 degrees.

“What do you add to that to get it to go?” Ste. Genevieve Mayor Paul Hassler asked Gary Roth, head of the street department, during a conference call with the Herald on Friday. He pointed out the predicted heavy snowfall for Sunday and Monday.

“We use a lot of sand,” Roth said. “No. 1, it gives you traction and, No. 2, it’s an abrasive also. When tires are pushing at it, it grinds it into the ice and helps cut it up. When it gets down below 20, we start adding calcium to our spreaders. That melts down to below zero. What that does, when it gets wet, it heats up and warmer water helps the salt work, too.”

Hassler added that with three to five inches of snow predicted or Monday (Some forecasts called for 8-10 inches.) and a high of 7 degrees predicted, things would be dicey,

Roth said 100 tons of salt and a supply of sand and calcium were all arriving last Friday.

“But we’re going to be living with whatever we get Monday, all week, until we get some sunshine because every day they’re calling for a little bit more through Thursday. But it sounds like Gary’s ready for it.”

Schmieder said he was low on rock chips and was having to pay to have some hauled in. His own dump trucks had spreader beds already in place, so they couldn’t be used for hauling chips in.

Schmieder had called Nelson to make sure this was acceptable. Nelson noted Thursday that he appreciated the call, but that it hadn’t been necessary in an emergency situation like this.

For the city, Roth said that parked cars are a major problem most winters, along the city’s snow route.

“One of the biggest  things is, if people would not park on the street,” Roth said. “It would help us out a whole bunch. Going around cars, it’s harder to do and we don’t get the road nearly as clean.

“I second that,” Hassler said. “The only problem with that is not everybody has off-street parking. I can see were that is an issue,”

“But I understand if they don’t,” he said. “Nobody likes to be cooped up.”