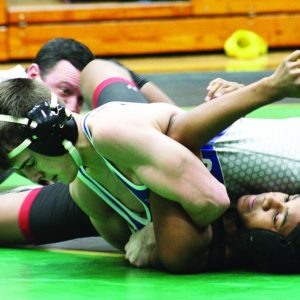 NEW MADRID — For Valle Catholic High School wrestler Joseph Flieg, not being able to compete during the postseason last year has served as motivation.

Flieg, who transitioned from the 126- to 120-pound class this year, won both of his matches by fall this past Saturday — earning a gold medal at his new weight.

“That was big for Joseph,” Gegg said. “He was motivated, and worked hard in the offseason. He had a good chance to qualify for state (last year).”

Flieg improved to 28-9 on the season, and he helped the Warriors to a third-place team finish at the Class 1 District 1 tournament at New Madrid County Central High School.

Flieg needed just :21 to pin Brentwood’s Jason Manestar, following by a fall in 1:09 over Stephon Brown from the St. Louis-based Lift For Life Academy.

Josh Bieser also slimmed up this season, going from 152 down to 145 pounds this season. Bieser, a state qualifier in 2020, also claimed a gold medal.

Gegg said he was pleased to see Bieser (32-4 record) push through in the 145-pound championship match, with Josh’s conditioning proving to be the difference.

Lift For Life’s Larry Norrington extended Bieser the full six minutes, with Josh coming out on top via a 12-8 decision. Bieser recorded a first-period pin in the semifinals, needing 1:14 to dispatch NMCC’s Skyler Price.

This marked the best the Warriors have ever fared at a district tournament, even though this year’s event was different thanks to new Missouri State High School Activities Association guidelines in the COVID-19 (coronavirus) pandemic era.

Nine of 10 Valle Catholic wrestlers have advanced to the sectional meet, which will take place at Palmyra High School in northeast Missouri on Feb. 27.

Jackson Fowler, wrestling heavier opponents throughout the day, pinned Lift For Life’s August Bennett in 1:41 for third place. Brandon Giesler (152) earned his 10th victory of the season with a fall in 2:04 over Brentwood’s Luca Gold.

Gavyn Joggerst (126) and Jayce Bales (138) received forfeits, with this pair of Warriors advancing to sectionals due to a lighter load of matches.