“We wanted to give our freshman a chance to start and be announced in front of family and friends,” Bauman said. “Being that we weren’t able to field a JV team this year, these girls have been restricted to just scout team with some occasional late-game varsity minutes.”

Valle Catholic, after last Saturday’s MAAA Tournament loss to Potosi, stands at 8-14 on the season.

(An aside, there is a separate MAAA Tournament story in this issue of the Ste. Genevieve Herald.)

Bauman said the girls earned the opportunity, playing well both offensively and defensively.

Fittingly, Gegg stole a Bismarck pass in the game’s closing moments, and the Warriors dribbled out the remaining time.

The Warriors showed plenty of hunger for victory, bolting to a 28-2 lead with 2:12 left in the second quarter after Sam Loida connected on a layup.

Valle Catholic was up 34-12 at intermission, and built its lead during the fourth quarter — with the game’s final differential the Warriors’ largest margin of the entire game. 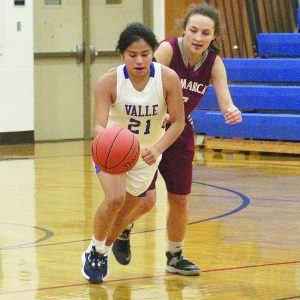