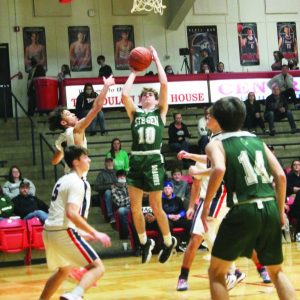 PARK HILLS — The Ste. Genevieve and Central High School boys’ basketball teams were deadlocked at 73-all going into the game’s final minute at Foulon Field House on Tuesday, Feb. 2.

Ste. Genevieve’s Rudy Flieg made a bucket with 11 seconds left, and the Dragons topped the Rebels 75-73 in this Mineral Area Activities Association Large School Division brouhaha.

The win lifted Ste. Genevieve to second place in the MAAA Large School Division standings, boasting an overall record of 14-6 heading into the conference tournament this week.

“It was a great win for us,” said Ste. Genevieve head coach Robert Coleman. “It gives our guys confidence that they can play at a high level. It was a big win for us, to get the No. 2 seed in the conference tournament.”

Coleman was pleased to see the Dragons score 75 points, tying for the team’s second greatest offensive output of the season.

“I thought we did a great job on the offensive end moving the ball against their zone,” Coleman said. “We had a lot of good looks.”

Central stayed stride for stride with Ste. Genevieve by attacking the Dragon defense well off the dribble — but the Dragons’ amped up the defensive pressure when it mattered most, deep into the fourth quarter.

As is typically the case, the atmosphere for a Dragon-Rebel game was electric, and Ste. Genevieve drove home happy.

The Dragons were able to withstand yet another dazzling performance from Central freshman phenom Jobe Bryant, who had a game-high 29 points.

Aiden Boyer was Ste. Genevieve’s leading scorer with 17 points, including 5-of-6 from the free-throw line. Ricky Hunter and Blake Morganthaler added 12 points each on four 3-pointers. Logan Trollinger contributed 11 points, and Flieg 10.

Boyer also snared eight rebounds to lead the Dragons in that statistical category as well — to go with three assists, one pass deflection and one steal. Trollinger paced the Dragons in assists with eight, and steals with three.

Central established an early 25-21 lead, and the Rebels’ margin was down to 43-41 at intermission. Ste. Genevieve pulled ahead 63-59 at the end of three, and the Dragons managed to stay in front for the win