Garry Nelson would like to see one more project completed soon.

The Ste. Genevieve County presiding commissioner hopes to see the gazebo and landscaping at the south end of the new county parking lot completed as soon as weather allows.

In April 2019, local historian Bob Mueller and local business owner Lawrence Myers, who is also an architect, provided plans for a bicentennial plaza for the Market Street edge of the property, complete with a memorial to John Scott, Missouri’s first congressman, and landscaping with a grassy area, a bench and various plants. The plants would include hicks yews, European hornbeam and Johnson crabapple.

It would not only be attractive, but educational, Mueller suggested at the time.

The parking lot was completed in 2020. This winter, the spot where the gazebo or pavilion will go was dug out and prepared. 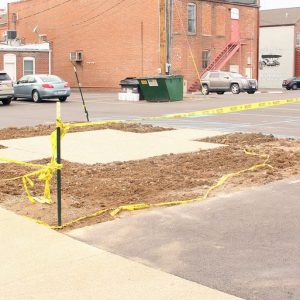 Nelson said during last Thursday’s commission meeting that the Ste. Genevieve Rotary Club has offered to assemble the  gazebo when the weather warms up.

About the time Mueller and Myers presented their plan, the county got a demolition permit from the city for the County Services building. The building, built as the Stanton Ford showroom and garage in 1953, and was in poor repair. The asbestos removal, demolition and site cleanup took most of the summer of 2019. After that, gravel was spread before paving began in 2020.

Nelson said he wants to see this final step put into place, to wrap up the project.

“It’s incomplete,” he said. “I hate to see things incomplete. I’d like to get the gazebo up as soon as it warms up enough and the bushes planted this spring.”

During his regular report to the commissioners, road and bridge foreman Scott Schmieder informed them that another 37 road signs ad been stolen. He said his crew was busy making new ones and would be putting them up.

The commissioners have repeatedly stressed the danger in stealing road signs. Even stop signs have been stolen before, which have obvious dangers. Road signs disappearing though, can delay emergency personnel, costing critical minutes in medical, fire or criminal emergencies they have stressed.

Various means of stopping the thefts have been tried, including spearing special grease on them that will not wash out of clothing, and setting up cameras at various locations.

“We’ve tried everything,” Nelson said. “I don’t know what the answer is.”

Schmieder also reported that his crew has been hauling rock, grading and cutting limbs.

He said he might pre-treat the roads on Friday, since forecasts were calling for  rain and possible light snow, with temperatures well below freezing over the weekend.

He also reported that Scott Boyer from Viking-Cives in Morley, Missouri, was coming up to adjust the hydraulics of the two new Western Star dump trucks.  He said it was “too fast,” moving the blades too quickly and violently. A slight adjustment should remedy the problem.

Schmieder also said he bought another five gallons of cleaner for cleaning and protecting equipment for about $400. It cleans spreader beds and other items that come in frequent contact with salt, in addition to rocks and other material, and prevents rust. He said this should be a two or three-year supply.

Associate county clerk Michele Gatzemeyer added that Don Heil Oil Company had submitted the lowest bid for road and bridge fuel and had been awarded the bid.

Wabash Valley Power Alliance, which plans to construct a 19-mile transmission line and towers through the northwestern part of the county, will hold a virtual forum at noon on Feb. 17, to give property owners a chance to express concerns.

Last year, several complaints were received by the commission, mainly due to “strong-arm” tactics used by a firm hired by Wabash Valley to get area residents to sign easements.

A press release said Wabash is “taking a fresh look at the routing process.”