Warriors’ head coach Tyler Search noted his team squared off against Kingston twice in one week during the 2019-20 season as well.

It was a banner week for the Valle Catholic program, which included Carter Hoog establishing another benchmark — scoring his 1,500th point in a loss to North County in Bonne Terre last Thursday. 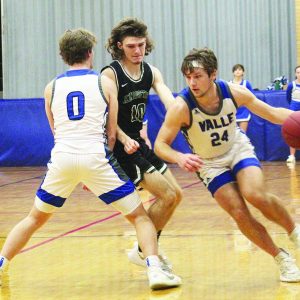 “It can definitely be a little strange playing the same team twice in one week,” Search said. “The only thing we can do is prepare to play well, and worry about the things we can control.”

“Carter is definitely a special player, and it was great to see him reach the 1,500-point mark,” Search added. “He has put in the work to get where he is now, and I’m extremely proud of him.”

Search said playing stout North County will only help Valle Catholic get better, especially in preparation for the upcoming district tournament. The coach reported Carson Tucker was lost for the season due to injury.

Valle Catholic (14-7 record) handled Kingston well in both games, with the Warriors defeating Kingston 64-41 on Saturday evening in Farmington.

In that Feb. 2 win, the Warriors established an 18-7 lead at the end of one quarter — and they were ahead 26-17 at intermission.

A dazzling Aiden Heberlie dunk in the second quarter was disallowed because he was called for a charging violation. Heberlie applauded the Cougars while walking back up court.

The dunk is available for viewing on the Ste. Genevieve Herald’s Twitter site (@HeraldSte1), with 36 likes and 928 views as of this past Monday afternoon.

Kingston closed within seven points (36-29) after three quarters; however, Valle Catholic bumped its margin back to 14 points twice in the fourth.

Hoog drained a couple of free throws, and Heberlie cleverly spotted Clayton Drury inside for two — which gave Valle Catholic a 50-36 lead with 2:31 left in the final period.

Hoog was the game’s leading scorer with 17 points, including a whopping 9-of-10 from the free-throw line. He also had team-highs in all other categories, assists (five), steals (four) and rebounds (eight).