Some 2,000 of the county’s approximately 17,900 residents had received their first COVID-19 vaccination shot, even though the county had only received 1,100 doses. The rest went out of county to get theirs.

Throughout the county, praise has been coming in on the well-run vaccination clinics conducted at the Ste. Genevieve County Community Center’s Progress Sports Complex on Feb. 2 and Feb. 3.

Longtime county resident Jean Rissover called it “an extremely well-organized and efficient inoculation event,” and another longtime local, wishing to remain anonymous, said that “We had a wonderful experience.”

He described how a staff member and deputy pushed them inside in wheelchairs, then back out again after getting their vaccines.

The praise was widespread.

“I had more people bragging on your system up there. I was in Country Mart and some guy said, ‘I’ve never seen anything go so smooth in my life,’” Presiding Commissioner Garry Nelson told Mueller.

Mueller was quick to spread the credit.

“It wasn’t just us,” she said. “It was the hospital, the ambulance district … it was a community effort.”

“I could not be more pleased about it,” she said. “Those girls were amazing.”

The first day, there were eight to 10 stations and six to eight on Wednesday.

“It didn’t take long to get through,” Nelson said.

“I thought the biggest hiccup was going to be the waiting,” Mueller said, “but it worked out.”

“I have to hand it to you,” Nelson told her. “We did not get one complaint.” 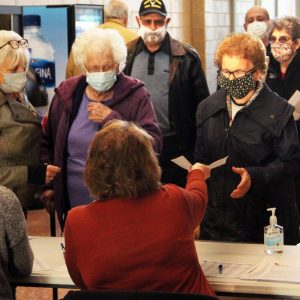 The high percentage of county residents who have already received their first shot is encouraging.

Buoyed by the success of the two-day vaccinations, Mueller is confident the rest of the Phase 1A and 1B vaccinations can be given as soon as sufficient supplies of the vaccine arrive.

“The clinic went so well, once we get enough vaccine, we think we can knock it out,” she said.

Nelson asked whether she had any idea when the next vaccination event may be.

“We will not put anything out there until we have an email that says, ‘Your vaccine is shipping,’” Mueller replied.

The topic of reactions to the shots came up. Mueller said that everyone getting the vaccine was given a sheet of paper from the state, asking them to describe any adverse reactions they had, so a data base can be established.

“The state really wants people to utilize that,” Mueller said. “Get on there and every single day put what your reactions are, because that’s were the data comes from. It’s not going to be because you call up and say, ‘I’m sick.’ You have to go on that site.”