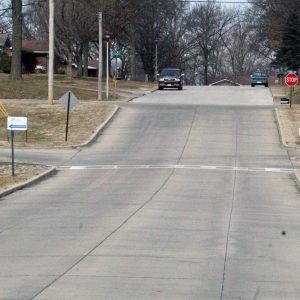 City of Ste. Genevieve Board of Aldermen recently had a work session to discuss traffic concerns on both Pine and Park Streets.

Dr. Joseph Sharlow, a surgeon at the healthcare center, had a conversation with an unnamed nurse in passing.

“She said, ‘Oooh, there was a close call this morning,’” Sharlow said. “’I was crossing the street, and got brushed by a car, right there on Pine Street.’”

In turn, Sharlow decided to investigate even further traffic concerns around the hospital.

“Two of the other nurses in the room said, ‘Oh boy, I tell you people don’t stop,’” Sharlow explained.

So it appears pedestrians have, at times, a problem crossing Pine Street from the hospital to a pair of parking lots on the other side.

Sharlow, who did the lion’s share of the talking on the matter, is concerned a pedestrian could get struck.

“There was a close call that spurred the question of crossing Pine Street into the parking lots,” noted Ste. Genevieve city administrator

Currently, there is a white-dashed crosswalk on Pine Street; however, many at the work session questioned its effectiveness.

There are pedestrian crossing signs in both directions in the area, and there also is a well-placed light a few yards from the crosswalk itself.

Welch reported the area is marked as a 20 mph speed zone.

But, is all that deterrent enough to prevent an accident from happening?

Sometimes health professionals crossing Pine Street wear dark-colored scrubs, during the early-morning hours before sunrise, which can be a concern for drivers.

One prime time for shift changes at SGCMH is from 5-8 a.m.

Sharlow said the incident reportedly happened at “about 6:45 a.m.”

One possible solution is having a traffic study; however, that would mean bringing about the additional cost of engineering services, Welch said.

Other communities have been placing yellow flashing signs near their healthcare centers, including in Fredericktown, for example.

“Are the street lights we have there enough?” Mayor Paul Hassler wondered aloud.

Another option discussed was raising the crosswalk itself, which would in turn slow down drivers’ speeds.

It also was noted Pine Street doesn’t have any sidewalks running along the roadway, only curbs and gutters.