Ste. Genevieve High School’s Abby Moore made a putback basket and then a free throw to give the Dragons a 15-0 lead with 2:50 left in the first quarter during a Monday, Feb. 1 game versus rival Park Hills Central.

The Rebels never completely shoveled out from that early hole.

Ste. Genevieve girls took a photo after the game, holding three fingers up with enough smiles to make a dental commercial.

It was a far cry from Central’s 67-59 victory over St. Genevieve in the championship game of the Bob Sechrest Jr. Christmas Tournament — when the Dragons fell behind early and committed 22 personal fouls. 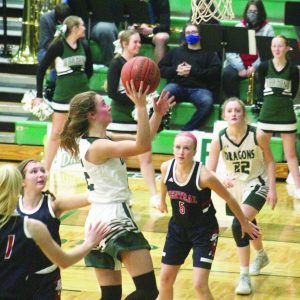 “Our girls came out ready to play, and set the tone early with our defense,” Walk-Robison added.

Ste. Genevieve scored early through both steals and pass deflections — Moore deflected a pair of Central passes that were transformed into turnovers. Maci Reynolds added three steals and Jayden Pullins and Marysa Flieg two apiece. Pullins also had a remarkable blocked shot during the second half.

Megan Aubuchon, the night before signing with Central Methodist University for track and field, paced the Dragons with 15 points including 3-of-7 from the free-throw stripe. Reynolds added 13 points, with one 3-pointer.

Shelby Horton, the Rebels’ leading scorer with 14 points, made a bank shot to close Ste. Genevieve’s lead to 23-10 with 1:50 left in the second quarter.

However, the Dragons responded with a Reynolds bucket inside the lane then Sydney Bumgardaner nailed a 22-foot 3-pointer just before the intermission buzzer sounded. Ste. Genevieve was ahead by 18 points.

Aubuchon connected on a traditional 3-point play in the third quarter to give the Dragons their biggest margin of the game (37-13, 4:31 mark).

The Rebels trimmed the Dragons’ advantage to 12 points in the final frame; but, that’s as close as the game got.