The boys blanked Herculaneum, 82-0, and Cape Notre Dame Regional, 84-0, with only DeSoto pressing Ste. Genevieve before it won 54-21.

Seniors Dalton McNeal (126), Nathan Selby (145) and Kaleb Myracle (160) as well as Autumn Basler (117) were all honored before the quadrangular at Peggy J. Johnson Gymnasium — walking with their parents and receiving gifts of thanks.

“Any athlete that commits to your program in any capacity holds a special place in a coach’s heart,” Ste. Genevieve head coach Jared Bonnell said.

“We’ve seen this group of seniors grow throughout their careers,” the coach continued. “They have trusted us with so much, and we don’t take that for granted. I hope they have enjoyed their time with us as much as we have with them.” 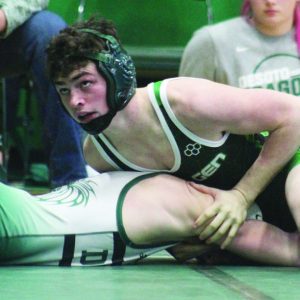 Bonnell said Ste. Genevieve could have wrestled better versus DeSoto, but some JV wrestlers gained experience and Dalton McBride wrestled up two weight classes at 182 pounds.

The most entertaining match of the card took place in the heavyweight division with Ryan Schmelzle of Ste. Genevieve rallying to pin Timothy Harmon at 5:43.

There also were a smattering of girls’ matches on the card, with Ste. Genevieve’s Maggie Myracle pinning Hannah Eberhardt of DeSoto in 2:56. Dakota Meadows pinned Hannah Kamp in just :36. Paityn Basler (107) and Brynna Wehner (112) both won by forfeit.

Five weight classes were double forfeits with no points for either team as Ste. Genevieve won the dual, 30-24.

Isabel Basler (127) recorded an 18-5 major decision over Eddyson Reeves of Herculaneum and she pinned CNDR’s Lily Ahlvin in only :42.

IMPERIAL — Ste. Genevieve won three weight classes, and also picked up a second at the Seckman Invitational this past Saturday.

“The girls wrestled well,” Bonnell said. “They all got to have some success, which is always good rolling into districts. It’s exciting to see them have success.”

The girls’ program continues to build under Bonnell’s tutelage.

Dakotah Meadows won both of her matches to claim gold at 120, which included a pin in :36 over Mexico’s Abbigale Drew.

Izzy Basler won three matches by fall, including the fastest pin of the day, in the 127-pound group. Basler pinned Isabella Schiffer of St. Charles in just :12, and Savannah Scheldberg of Central in only :44.

Maggie Myracle was tops in the 195-pound group, winning both of her matches by pin — including one in :43 over St. Charles’ Heather Simon.

Autumn Basler won two of three bouts at 117, including first-period pins over Jackson’s Gracie Metzger (1:05) and Sarah Gazaway of Festus (1:21). Basler extended Hayley Newtown of St. Charles to the third period before being pinned.