A trap game can be defined a variety of ways, but it’s when a stout team overlooks what’s perceived as a weaker opponent.

The game versus the Trojans was sandwiched in between a Monday, Jan. 25 divisional game versus North County — which Ste. Genevieve rallied to win 71-60 behind 21 points apiece for Sydney Bumgardaner and Megan Aubuchon — and last Monday’s game against Park Hills Central.

This marked the Dragons second victory over Potosi this season, having also defeated them 67-46 at the Bob Sechrest Jr. Christmas Tournament on Dec. 26 in Park Hills.

“Our girls figured out that if we stepped up our defense that it wouldn’t matter what they tried against us,” Ste. Genevieve head coach Jordanna Walk-Robison said. “I am proud of them for stepping up.” 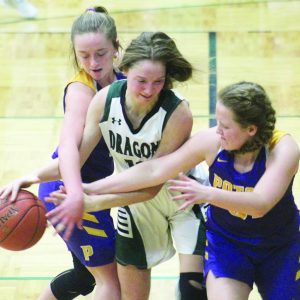 Walk-Robison said the girls looked at what was working well, and Ste. Genevieve (14-4 record) rolled to its 10th straight win dating back to Jan. 7 — 61-14 over Seckman.

The MAAA Large School Division has three standout teams this year, including the hometown Dragons. Park Hills Central and North County have been formidable opponents, and all three schools have controlled non-league opponents as well.

Both Abby Moore and Aubuchon have pulled down 103 rebounds this season. Maci Reynolds and Bumgardaner have dished off 108 and 106 assists, respectively. Reynolds also leads the team in steals (81) and deflections (32). Bumgardaner is tops in blocked shots with 32.

In the win over Potosi, Aubuchon was a dominant force — scoring 27 points on 12 field goals and 3-of-5 shooting from the free-throw line. Reynolds added nine points and Bumgardaner eight.

Potosi had the upper hand early in the game, outscoring Ste. Genevieve 12-6 in the opening period. The Dragons then outscored the Trojans by a combined 36-6 in the second and third quarters for a plentiful 42-18 cushion.