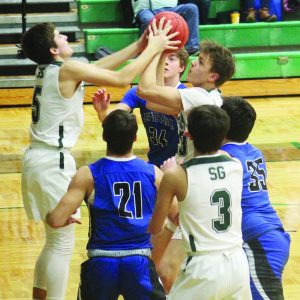 That’s because the Dragons were right back at it on Saturday evening — playing non-league Jefferson R-7 at Peggy J. Johnson Gymnasium.

“It wouldn’t be my first choice,” said head coach Robert Coleman of such a quick turnaround, “because I knew North County on Friday would be tough. I knew it would be a physical game.

I guess on the other hand, it makes you move past the loss and not sit around and think about it all weekend.”

Ste. Genevieve exploded in the third quarter, outscoring Jefferson R-7 23-2 during the period, en route to a comfortable 55-35 victory.

While the loss to North County snapped the Dragons’ seven-game win streak, the conquest over Jefferson propelled Ste. Genevieve to a 13-6 record.

“We came out and hit a couple of big shots that gave us some energy,” Coleman said of the third-period burst. “I thought our defensive pressure picked up, and really made it difficult on Jefferson.”

The Blue Jays were much more efficient on offense in the first half, and that’s why the Dragons were up only 27-22 at the break.

Dynamic Ste. Genevieve guard Ricky Hunter scored the first eight points of the second half, with memories of his third-quarter run at Fredericktown eight days earlier in many fans’ memory banks.

Logan Trollinger canned a 3-pointer from the left wing, Thomas O’Brien scored inside, Carter Klump converted a couple of free throws, Aiden Boyer muscled inside the paint for four points and Blake Morganthaler dropped in a 3-ball of his own during the run.

Ste. Genevieve was up 50-24 at the end of three quarters, and the outcome was no longer in doubt.

Hunter finished with a team-best 14 points, including four 3-pointers. Boyer totaled 13 points, including 7-of-8 from the free-throw line, and 10 rebounds for a double-double. Four of Boyer’s boards were on the offensive end of the floor.