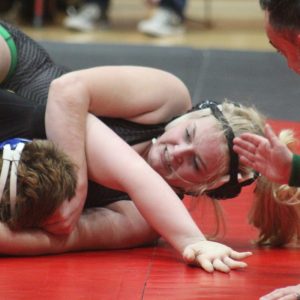 JACKSON — For the first time ever, the Southeast Missouri Regional Wrestling Conference had an exclusive girls-only league tournament.

Girls’ wrestling continues to grow across the Show-Me State, and what’s happening the southeast corner is no exception.

“It was exciting to see the girls get a chance to compete for all-conference honors,” said Ste. Genevieve head coach Jared Bonnell. “I was impressed with how much improvement there has been with all the girls programs in just a few short years.”

“I was happy with the way we wrestled overall,” Bonnell said. “We were trying to win the conference tournament, but I knew it was going to have to be a “perfect storm” type of thing to accomplish that task.”

All of the girls wrestled tough, said Bonnell, who was honored during the summer of 2020 as the District 1 coach of the year.

Izzy Basler, at 127 pounds, and heavyweight Maggie Myracle both earned gold medals for the Dragons.

So each wrestler enjoyed some modicum of success.

North County’s Brooke Bennett provided Myracle with her biggest challenge of the evening. However, Myracle pulled through with a 3-2 decision. Maggie also pinned Central’s Karli McFarland in 1:01.

Izzy Basler was dominant in her weight bracket, recording three pins and a 14-5 major decision over Poplar Bluff’s Alexis Rowland. Basler’s quickest pin of the evening was in 0:21 over Hillsboro’s Grace Johnson.

Autumn Basler recorded a couple of wins, including one with a pin at the 5:48 mark.  Meadows pinned Dexter’s Destiny Ahrens in 0:23 to round out the Dragons’ performances.