Not every cemetery has a marker for a man born a slave who took up arms to end slavery and restore the Union, and who was lovingly eulogized by his hometown newspaper.

Farrar “Moses” Riney, a Civil War veteran who died in 1921, is buried there. In fact, he is about to be honored by a special day.

Greg Elder is organizing an art event to honor Riney on what will be the 100th anniversary of his death, on Feb. 16.

Elder has a Facebook group called “Uncle Moses,” as Riney was fondly called in St. Mary in his later years.

Elder said the entire event and call for art has been organized without a single in person meeting, – a good thing during the COVID-19 pandemic. That includes obtaining a proclamation from Mayor Carlton Wyatt of St. Mary calling Feb. 16, 2021 “Moses Riney Day.” 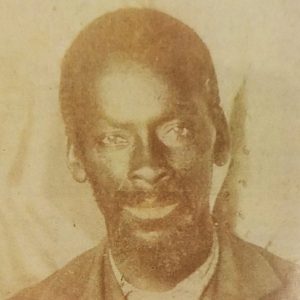 Riney was born a slave in Perry County on Jan. 18, 1844. Following emancipation in 1864 he joined the Union Army and Company C Regiment 68 of the U.S. Colored Infantry during the Civil War. He was later promoted to the highest rank a black soldier could achieve, a corporal.

Riney’s first battle was at Fort Pillow where he likely witnessed a massacre. On April 12, 1864. Confederate troops killed nearly 200 black troops fighting for the Union. The massacre became a rallying point for enslaved people fighting for their freedom, and it hardened the resolve of black Union soldiers, who used “Remember Fort Pillow!” as their battle cry.

After serving for more than two years and being involved in five battles during the war he returned home in 1866. Elder said it is unlikely members of troops from the “colored infantries” were honored when they returned from service. In fact in the south they were often targets of violence.

Riney married Mary Burgette, who had also recently been freed. After about 16 years, they bought a farm in the St. Mary area, not far from Riney’s former master. They raised 13 children. The couple later moved into the city of St. Mary and found a welcoming place at Immaculate Conception Catholic Church.

The event Feb. 16 will be in that same historic church.

Elder explained what led him to honor Riney.

“I worked as a television anchor/reporter for more than a decade and I remember a story I covered from Northeast Oklahoma on a reservation where a team rushed in to record the language of the last member of an Indian tribe who spoke it,” he said. “Also I grew up in St. Mary’s and remember during our 1974 Immaculate Conception Church Centennial celebration seeing our very unique history in a book honoring that event and the town.”

He said he was moved by the July 2019 ceremony and the fact that so many members of Riney’s family attended. Later, he discovered that Pat Webber was working on a genealogy book called A Special Story: Moses Riney.

“I was hopeful that artists would answer the call to help tell the story of Moses Riney and his family, especially since we had so much information about them, including a photo,” he said. “So far I’m pleased with the response. I’m also thrilled that we’ve had so much success promoting and organizing this event using a Facebook group.”

Elder said a portrait painting of Moses Riney that was done by a participant of the project from the only known “tin type” photo of him has been very well received by those who have viewed it. Another artist is working on a portrait of one of Moses’ daughters.

Meanwhile anyone else wanting to participate still has time to complete work and should request to join the Facebook group “Uncle Moses.”