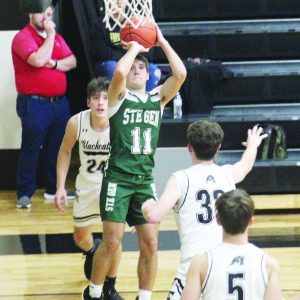 Ste. Genevieve was up comfortably 34-22 at intermission.

The Dragons then proceeded to outscore Fredericktown 12-0 in the first 1:56 of the third quarter for a 46-22 cushion — turning a competitive game into a rout — as Ste. Genevieve declawed the Blackcats 72-42.

It was all Ricky Hunter’s doing as he knocked down a pair of 3-pointers from various locations along the arc, sank two free throws and scored a pair of baskets inside — including a deuce off a nifty feed from teammate Anthony Nash.

“I thought we did a great job of moving the ball against their zone (defense) most of the night,” Ste. Genevieve head coach Robert Coleman said. “In the second half, we were able to get Ricky some looks. The guys executed really well, and he was able to knock down some shots.”

The Dragons netted 25 third-quarter points, staking themselves to a 59-34 advantage by the end of three quarters — and eventually, the final four minutes of the game was played using the state-mandated running-clock rule.

Ste. Genevieve’s boys, like the girls, are streaking, winners of six straight games.

“The boys have some pretty good confidence going,” Coleman said. “We are starting to put things together on both offense and defense.”

Coleman also credited the Dragons for improving their rebounding skills, with Aiden Boyer leading the way with 10 caroms (including three on the offensive glass). Blake Morganthaler and Rudy Flieg contributed five boards apiece.

Hunter was the Dragons’ leading scorer with 19 points, including three 3-pointers, while Landon Rose and Logan Trollinger both scored in double digits with 10.

Trollinger, Nash and Boyer combined their forces for 18 of the Dragons’ 20 assists. Boyer also swiped a team-high four steals, and Nash took a pivotal charge to help Ste. Genevieve extend its lead in the second quarter.

Rose scored the final basket of the game on a clever pass from Klayton Squires, another indication of how selfless these Dragons have become — especially during this winning streak.