CAPE GIRARDEAU — The COVID-19 (coronavirus) pandemic has caused many changes to sports schedules this year.

For instance, this year’s Southeast Missouri Regional Wrestling Conference Tournament was split into large and small school meets — rather than one 16-team group.

The Class 1-2 meet took place last Friday evening at Cape Central Junior High School, with Ste. Genevieve coming out on top — racking up a whopping 325 points according to standings gleaned from trackwrestling.com. 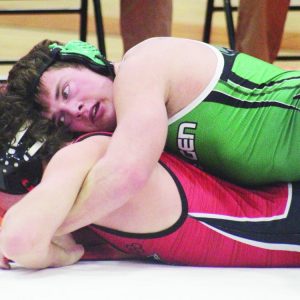 Like the girls’ tournament last Thursday, this was a five-round, round-robin event — with plenty of breaks in between thanks to Missouri State High School Activities Association guidelines.

“It was great to get someone from out program to win at SEMO Conference,” said Valle Catholic head coach Jacob Gegg, “even though it was split into small school/big school. It’s a great confidence boost for Josh, proof that hard work pays off.”

Dean Parker from Park Hills Central was Bieser’s biggest challenge, but he earned a 10-6 decision. He won all four other bouts by fall, raising his season record to 30-4.

Meanwhile, Ste. Genevieve was strong throughout the weights, winning gold in the lightest class (Gage Gross at 106) and Dale Propst all the way up at 220.

The Dragons’ bread-and-butter this year has been the middleweights, however, and they didn’t disappoint here.

“I was extremely proud with how they wrestled,” Ste. Genevieve head coach Jared Bonnell said. “I’ve told many people that this may not be the most talented group we have; but, they all work and compete for one another. This group definitely deserved to win.”

Bonnell added he thought the Dragons had the potential to win six weight classes, and that’s exactly what they accomplished. The coach also commented taking first place was a “team effort.”

Gage Gross was strong, especially early, with pins in :11 and :16 over Chase Berry of Dexter and Chris Coffer from New Madrid County Central, respectively. Gross has lost only one match all season.

The 132-pound class was tough to fill, but Gavin Gross (17-5) still went out and did the work — winning a pair of matches by first-period fall.

Selby (19-10) won all four of his matches by fall, with the shortest in 1:21 over Valle Catholic’s Jace Bales and the longest in 2:57 over Dexter’s James Deberry.

Myracle (22-9) recorded four victories by pin, and a fifth via technical fall over Dexter’s Carter Pennington, 16-0. The match was stopped at the 5:34 mark. Kaleb’s quickest work was a 43-second pin over Ty Blakey of NMCC.

Dale Propst (12-2) was the class of his weight group, with four wins (two pins, one technical fall and one major decision). Propst downed Central Park Hills’ Austin Carver, 18-6, and he had a 15-0 technical fall over Potosi’s Aiden Martinez.

For Valle Catholic, Joseph Flieg also produced a stellar performance with a second-place finish, winning four of five matches by pin, including one in :40 over Potosi’s Tanner Adamson and :42 over Wirick.