The Warriors honored seniors Carter Hoog and Cory Stoll during the night’s festivities, and the two players certainly didn’t disappoint on the court.

Hoog dropped in a game-high 35 points — three points off his career-best performance against Ste. Genevieve from mid-December — and Stoll added eight points in the second half.

“Senior Night should always be special for the players,” Valle Catholic head coach Tyler Search said. “They have contributed so much to this program over the last four years, and I know they will finish this season the right way. 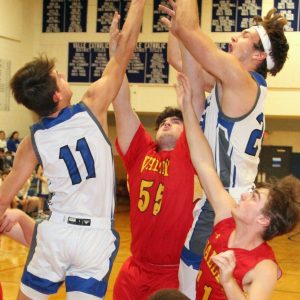 “Carter and C.J. (Cory) are two players that I will always remember because I accepted this job right before their freshman season,” Search continued. “It was great to be able to coach them all four years, and watch them develop.”

Search said Mineral Area Activities Association Small School Division foe Valley Caledonia was a challenging opponent because the Vikings are scrappy and they like to mix up their defensive styles.

However, Valle Catholic was able to stay ahead of Valley Caledonia, with a 17-13 lead at the end of one quarter. The Warriors built their advantage to 36-25 by halftime, and then 58-44 at the end of three.

Valle Catholic was able to salt away victory from the free-throw line. Valley Caledonia recorded 28 personal fouls that the Warriors turned into a whopping 36 free-throw attempts. Valle went 25-of-36 from the line (69.45 percent).

Hoog scored in many ways, including five 3-pointers and 4-of-8 from the stripe, to go with a team-leading 10 rebounds and two blocked shots.

Chase Fallert added 13 points, which included 12 free-throw attempts of his own, and provided Warrior-bests with five assists and four steals.