CAPE GIRARDEAU — The Ste. Genevieve High School girls’ basketball team has been featured in many special events this season.

And for good reason, the Dragons have won eight consecutive contests, and they deserve to be considered one of the premier programs in Missouri. 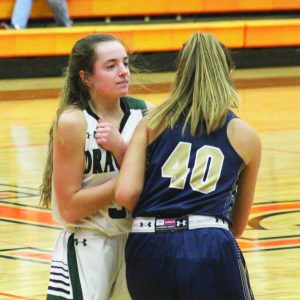 The latest installment came this past Saturday as the Dragons thumped Saxony Lutheran, 61-34, in the Missouri Sports Hall of Fame Basketball Classics at Cape Girardeau High School.

“It was an honor to be asked to play in it, and the girls had fun,” said Ste. Genevieve head coach Jordanna Walk-Robison.

Ste. Genevieve has been playing like a dynamo lately, including a 49-43 conquest over Cape Notre Dame on Monday, Jan. 18.

“The girls have been playing very well together,” Walk-Robison said, regarding this recent run of bountiful fortune. “They have stepped up, and played with a no-fear attitude.”

Rebounding and improved defense have been the leading indicators, Walk-Robison mentioned.

Ste. Genevieve was hardly pressed versus Saxony Lutheran, with the Dragons tallying the game’s first 14 points — including a pair of Marysa Flieg conventional 3-point plays, a Sydney Bumgardaner bank shot and Maci Reynolds 3-ball from the left wing.

The Dragons’ smallest lead of the game was nine points after successful perimeter jumpers from Emma Voelker (a 3-pointer) and Maddox Murphy.

Bumgardaner sank two free throws in the final minute of the first half, producing a 42-17 Dragons’ lead at the break.

Moore made a pair of free throws with 4:32 left in the fourth quarter for Ste. Genevieve’s widest margin (59-27).

Reserves mainly played during the final four minutes, with Morgan Schwent adding her name to the scoresheet.

Moore was Ste. Genevieve’s leading rebounder with seven, including two on the offensive glass. Bumgardaner dished off a game-high 10 assists, and Reynolds seven. The Dragons also had 23 steals, with Jayden Pullins leading the way (nine), and six pass deflections.