Valle Catholic High School wrestling squad has been making progress as the 2020-21 season as crept along.

Case in point this past week, as the Warriors won five dual matches — including a couple at home on Monday, Jan. 11.

The Warriors defeated Southeast Missouri Wrestling Conference foes Potosi and New Madrid County Central during one dual — and then knocked off Lift For Life, a private school based in St. Louis County, on Tuesday, Jan. 12.

“We got to see some conference and district opponents last week,” said Valle Catholic head coach Jacob Gegg. “So we have a feel what the competition will be like (this week at the conference wrestling tournament). 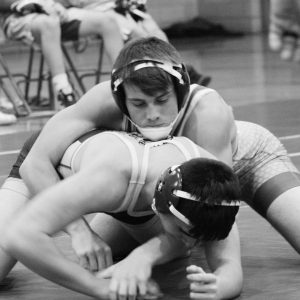 A seeding meeting will occur before matches begin. Festivities will wrap up with an awards ceremony following the final round.

(The Warriors won two more duals this past Saturday at Festus, defeating Westminster and Vianney Catholic. Host Festus defeated the Warriors. Complete details from those duals will be available in the Jan. 27 edition of the Ste. Genevieve Herald.)

In the win over NMCC, 106-pounder Kaden Gegg sparked the Warriors with a first-period fall over Chris Coffer in 1:19.

Timothy Okenfuss has finally dropped down to the 160-pound class, and he showed success during matches throughout the week — including a fall in 3:39 over NMCC’s Ty Blakely.

Valle Catholic’s Tucker Bertrand picked up the most hard-fought victory of the dual, recording an 8-5 decision over Jason Jones at 170. Joseph Flieg (120) and Jacob Calbreath (220) earned forfeit victories.

On Tuesday, in the Warriors’ conquest over Lift For Life at Foulon Field House in Park Hills, Jace Bales opened the action with a forfeit win in the 138-pound class.

Bieser followed up with a pin over Larry Norrington in 3:14 and Okenfuss followed with a first-period pin over Ta’Shne White (1:09)  — and Valle Catholic established a 24-6 lead through five matches.

Gegg wrestled up a weight class to 113, and he still pinned Cole Crocker in 3:42 during the bout with Central.

Central’s Dean Parker pushed Bieser, however Josh earned the win by pin in 5:41. Flieg picked up six points for the Warriors on forfeit.