The Dragons used both their size advantage and depth in a 58-39 victory over Valle Catholic on Saturday at Peggy J. Johnson Gymnasium.

“I thought the girls played hard, and I was glad we could get everyone involved in the win,” Ste. Genevieve head coach Jordanna Walk-Robison said.

“We had a bit of a rough week,” Valle Catholic first-year head coach Brian Bauman stated. “We knew we’d have to be on our best and they’d have to be off in order to keep it close.” 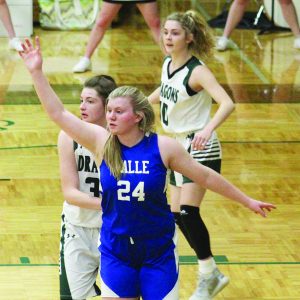 Bauman was complimentary of the Dragons’ program, too.

“They have been playing together for a long time,” the Warrior coach commented. “They have that edge from playing travel ball, and anyone of their starting five can put up double digits in any game.”

Ste. Genevieve’s Megan Aubuchon paced all scorers with 19 points while Abby Moore also tallied double digits with 13. Marysa Flieg canned the lone Dragons’ 3-pointer of the game as part of a nine-point performance.

Walk-Robison also credited the Dragon defense for stepping up during this recent stretch of success.

Ste. Genevieve’s Maci Reynolds swiped 11 of her team’s 23 steals, plus a team-best seven assists. Moore was the Dragons’ leading rebounder with nine, including four on the offensive glass. Sydney Bumgardaner contributed eight points and six assists.

Bryna Blum contributed 11 points (including two 3-pointers), and Ade Weiler chipped in with a team-leading six rebounds plus four steals and four assists.

Ste. Genevieve scored the game’s first eight points, and Aubuchon gave the Dragons their first double-digit lead at 13-3 with 3:19 left in the first quarter by converting a bucket down low.

Moore scored on a follow, lifting Ste. Genevieve’s lead to 36-13 with 1:05 remaining in the second quarter — followed by Ade Weiler’s traditional 3-point play.