That gave the Dragons four points versus the Indians; however, Jackson defeated Ste. Genevieve 48-26 in a battle of Southeast Missouri Wrestling Conference powers.

“When Dalton goes out, we expect himto win,” Ste. Genevieve head coach Jared Bonnell said. “And he’s done that more times than not. He’s given us leadership in the wrestling room.”

Earlier this season, McNeal crossed the 100-victory plateau, and he has a few more weeks to rise up the school’s career wins list.

Nathan Selby, another senior who wrestles at 145, has raised his acumen since Christmas. Selby recorded a convincing first-period pin over Charles McIntyre in 1:43.

“Jackson’s always a really strong team,” Bonnell noted, “and I am happy with the way we wrestled against them.” 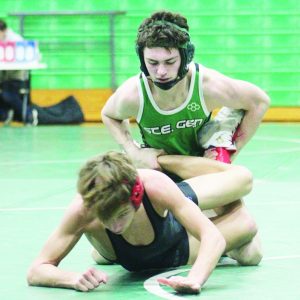 Even though Jackson won the bout by 22 points, there were several close matches — including a thrilling battle between Ste. Genevieve’s Dale Propst and Jackson’s Tony Terry at 220 pounds.

Both Terry and Propst also are decorated football players, and that athleticism translated to the mat.

The wrestlers were deadlocked at 6-all heading into sudden victory period No. 1 before Terry earned a takedown to win this highly engaging and competitive match.

In the Dragons’ 53-21 thumping of Windsor, McNeal recorded a 25-9 technical fall over Nicholas Baer. The match was stopped at the 2:43 mark.

Heavyweight Ryan Schmelzle and Matthew Schmidt (182) made quick work of their opponents from Windsor, recording respective pins in :35 and :38.

Levi Wiegand had the most challenging match for the Dragons during their dual match with Sikeston, a 57-24 win. Wiegand (152), who suffered an injury during the quadrangular, recorded an arduous 10-7 decision over Devyn Tinsley.

Kaleb Myracle (160) and Ethan Ogden (170) followed with wins by pin — and Ste. Genevieve was well on its way to thrashing Sikeston.

Gavin Gross pinned Asa Douglass just before the first-period buzzer sounded, another Dragon highlight. Bryant Schwent, Propst, Schmelzle and McNeal all picked up six points for the team either with a win by pin or forfeit.

Only Izzy Basler (132) and Autumn Basler (117) wrestled matches for the girls’ program on Wednesday versus Jackson.

Izzy Basler defeated Trinity Vanek; however, Gracie Metzger pinned Autumn Basler in 0:59. None of the other Dragon girls wrestled at the quadrangular.

Bonnell reported there will be a seeding meeting via the Zoom teleconferencing application today — determining the brackets.