COLUMBIA — Assigning teams into districts is a time-honored tradition for state athletic associations across the nation.

The Ste. Genevieve Herald will be turning winter district assignments into a three-part series.

This week, the Herald examines boys’ and girls’ wrestling districts, with girls’ basketball set for Jan. 27 and boys’ basketball on Feb. 3.

“Classes are divided via enrollment,” Ste. Genevieve R-II athletic director Dr. Jeff Nix noted. “They try to make sure no two schools in the same class have double (or twice) the enrollment.”

The only exception to this general golden rule occurs in Class 1, Nix explained.

Classes are divided geographically, typically starting in the southeast corner of Missouri. 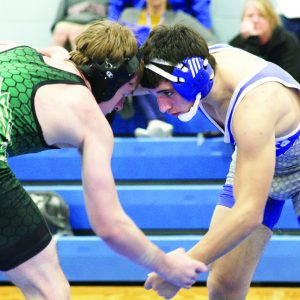 That means schools such as New Madrid County Central, Kennett and Hayti are placed first.

Ste. Genevieve and Valle Catholic have been placed into different groups, with the Dragons in Class 2 and the Warriors Class 1.

There is only one class in girls’ wrestling, with the Dragons assigned to Class 1 District 1.

District tournaments, both boys and girls, will feature a different format.

“We are excited about districts,” Ste. Genevieve head coach Jared Bonnell said. “The format is something new for all of these wrestlers, but there is still a lot on the line. I think the smaller tournament format will help with the anxiety that often is brought on by a larger district tournament.”

Bonnell said both Park Hills Central and Dexter have plenty of depth, and those two schools will provide the stiffest challenged for the Dragons.

“This year will be a bit different,” said Valle Catholic head coach Jacob Gegg. “Wrestling in Missouri went from a 16-team super district to an 8-team district.”

Gegg reported with Whitfield bumping up all the way to Class 3, this should level the playing field for the remaining schools.

“It will also free up a lot of space on the podium at the state tournament,” Gegg noted. “That also increases our overall individual placements at the district tournament, resulting in a better draw in the sectional and state brackets.”

Gegg said the Warriors most likely will field 11 of the 14 weight classes.