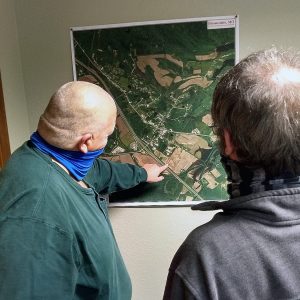 Mayor Paul Monia and Bloomsdale aldermen are eager to get started on the city’s big water line replacement project.

They conferred with David Van Leer of Cochran Engineering during the city’s Jan. 12 meeting.

Monia said he wanted himself and the aldermen to be able to grasp just what scope the project would have. This will include the ripping up and repairing of streets and other infrastructure necessary in replacing the lines.

“I wish it was as simple as just worrying about water lines,” Monia said. “But there are so many other things that are going to become key players with this that are probably as expensive or more expensive than just the water line replacement.

“Trying to get a scope of the size of the project and how we as a city can sit back and start to swallow those numbers and try to spit it out, ‘OK here’s where we start, here’s where we move forward.’”

One part of the plan will be just where to start the work and which direction to move.

Monia said he has revised an idea he had long held that the project should start at the water source and move into the city.

“I’ve always thought the smartest thing to do was to start where we start, with the tower, and move basically south,” he said. “I’m not so sure now. I’m not 100 percent sure we  don’t do just the opposite, or, if we start somewhere in the middle and spread both directions.

“I was never open to that concept before, but then I thought, ‘You know what? Maybe it’s more feasible to get some of these side streets and get some of that tied up and wrapped up and then go after the big lines and things like that.’ I don’t know.”

Van Leer said one thing to consider was whether the city was having to do ongoing maintenance work on any of the lines.

Originally installed when the city of Bloomsdale was first incorporated in 1963, the lines are definitely in the latter stages of their life. However, they are still fully functional at the moment.

Reaching behind him and “knocking on wood”  against a wooden door, Monia told Van Leer the aging pipes have held up well and are not currently requiring continuous maintenance

“Currently they’re doing OK,” he said, “but we’ve kind of teetered on just being OK because we’re undersized. It’s 1963 and a lot of it is still original equipment. It was the best of the best in 1963, but not the case today.”

Plus, he said, there are probably one and a  half times the number of connections to the lines than there were nearly 60 years ago.

Van Leer said he was sure Cochran could make some recommendations after looking over the system with street superintendent John Lurk.

“Again, I just like the fact that we’re moving forward,” Monia said. “We’ll gain a direction and we can start to follow through. This project means a while lot to me. It’s been brought up and tabled and brought up and tabled and there’s nobody to blame more for that than me, because I just didn’t push for it like it deserved. But it was time, once that other tax came in, it was time to start looking at it and focusing our attention on it.”

While the city is sitting on a good reserve of money, Monia noted that the city also wants to “try to find any additional income we can find, from whatever source it may come from.”

Van Leer said he will be working with Lurk. Monia agreed that “John is a great point of contact.”

“My goal would be to work with John and to, as quickly as possible, gain a strong understanding of your system and know the  ins and outs of it,” Van Leer said, “and then preliminarily work with John to come up with what we think the project scope is that you’re looking at, bring that to this board, and make sure you guys agree that that’s what the project scope is and then, from there, we see the rough  dollar amount of construction that we’re looking  at. From there, we come up with a game plan for what’s the path forward. Is this one big project? Is this 10 small projects? We’re going to need to have some understanding of the city’s financial situation.”

Monia said the city has “a nice sum of money” on hand, but that he is “not interested in plowing through all of that” to do the project.

Seeking low-interest financing federal loans, Monia said, would be his preference, rather than “cleaning out what we’ve worked so long to achieve.”

“We can take a good look at our finances and see what our payoff is,” he said.

He  added that he would not want to leave the city in a vulnerable situation by depleting the surplus, should some emergency come up.

Van Leer said the first step would be “some sort of water survey.”

He noted, though, that federal loans would require more expensive engineering surveys than a local bank would.

Monia agreed that paying a higher interest rate at a local bank would be less expensive in the long run, if the cost of having to meet federal requirements were figured in.

During the meeting, the city also signed a contract with Cochran, engaging the firm’s services for the project. The city had been meeting with various companies at the close of recent board meetings.

“I truly welcome you aboard,” Monia told Van Leer and another Cochran representative. “They had to make a difficult choice, but I think it will be a great fit.”

Before the contract was signed, one minor issue had to be resolved.

City attorney Mark Bishop advised the city to request Cochran remove one paragraph from the contract, limiting the firm’s liability for damages. Van Leer said that issue “comes up from time to time” and that striking the paragraph was no problem.

The project was made possible by the April 2018 passage of twin half-cent sales tax measures, one for capitol improvements, and one a transportation tax.

The capital improvements tax can be used for virtually any purchase designed to be used two years or longer, including water lines and the sewage system.

Both should come into play as the project progresses and the line replacement requires streets and sidewalks to be replaced.

• The city’s long-awaited city map, showing city borders, arrived from the Southeast Regional Planning Commission. Monia showed it to the aldermen at the close of the meeting.

Moon Over Market Is Friday