Ste. Genevieve High School starting girls’ basketball players found a comfortable spot on the bench in the second half versus non-league Seckman.

Then Regean Naeger and the rest of the reserves took over as the Dragons downed Class 6 Seckman 61-14 on Thursday evening at Peggy J. Johnson Gymnasium.

Naeger knocked down two 3-pointers as part of an eight-point performance, and teammates Jayden Pullins, Kylee Clayton, Maya Watts and Alison Braun also put a mark on the score sheet. 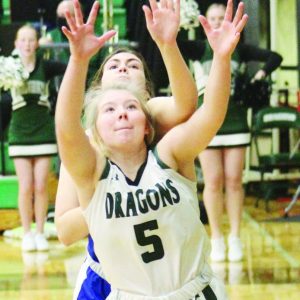 “She’s been lights out in practice, and we all were so excited for her to convert on those shots in the game,” said Ste. Genevieve head coach Jordanna Walk-Robison regarding Naeger.

“We are a family,” Walk-Robison continued. “So we celebrate successes even when you may not be in the game.”

Creating positive energy in all roles is part, and parcel, of the Dragons’ mantra.

In the win over Seckman, Reynolds fueled Ste. Genevieve in other ways with nine assists, six steals and three pass deflections.

“The girls came out ready to play, and set the tone very early on,” Walk-Robison stated. “We were able to get some easy baskets off our full-court pressure.”

And how, did they ever. Ste. Genevieve established a 26-3 lead after one quarter, and Aubuchon already cracked double-digit scoring.

Need another indicator on how lopsided this game was?

A Naeger layup helped total 51 points for the Dragons while Seckman was stuck on eight with 2:38 remaining in the third quarter.