Mueller reported that the cumulative number of total cases in the county was 1,574. There were 37 active cases, with a whopping 137 probable cases. There had been 12 deaths, plus one probable death at that point.

Mueller agreed and noted that they were mainly nursing home deaths. She said, though, that the nursing homes “are still doing a good job” in protecting patients.

“All it takes is one,” Nelson said.

Mueller handed out copies of the Center for Disease Control (CDC) guidelines for COVID-19 vaccine disbursement.

“I know you get calls, too, and we get lots of calls,” she said. 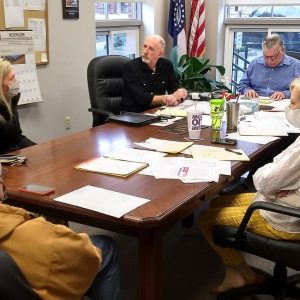 Phase 1A, which we are in now, allows vaccines to be given to long-term care facility residents and staff, followed by patient-facing health-care workers.

The next phase, Phase 1B, will begin with high-risk individuals age 18-64 and individuals age 65 and over, followed by first responders and then “essential” workers, which include childcare workers, teachers and education staff, water/wastewater workers, and also workers in energy, critical manufacturing and food/agriculture.

She said some callers ask about getting on a  waiting list for the vaccine.

“We are not doing waiting lists,” she said.

“You’ve got enough to do without that,” Second District Commissioner Randy Ruzicka added.

“When we announce that we know we’re getting it, then the appointment calendar will open up and its ill be first-come, first-served until we’re out,” Mueller said. “Hopefully at that point, it will be a case of you cab keep ordering a little bit at a time.”

She also info informed the commissioners that the Health Department had often to go ahead and now its a 10-day quarantine instead of 14 days. This follows changes in CDC guidelines. Initially, the plan was to maintain the 14-day requirement locally.

Mueller explained that a desire to keep students in school prompted the decision to embrace the 10-day policy.

“The kids have to be in school,” she said.

She feels that “the depression and suicide rate and just everything those kids are going through” now outweighs any health risk they might experience by attending live classes and interacting with their peers and teachers.

She said “It makes me sick” to see the suffering children are endorsing by being kept out of live education.

She said a webinar she took part in recently, confirmed those beliefs.

“The benefits of them being in school far outweigh the risks,” she said.

The 14-day quarantine made live classes extremely difficult to maintain. Schools, she said, have favored the 10-day policy.

“I talked to all the schools and they are all leased about the 10 days,” she said. “And we can’t do 10 days for the school and 14 days for the public.

She also stressed that families or businesses that want to impose more stringent guidelines are free to do so. The Health Department guidelines should be seen as minimum acceptable standards.

“If parents want to keep their children home 14 days, they can,” Mueller said. “They can make their own good decisions, here. Businesses can have their own policy. There are a lot of places that do.”

New Drug Dogs Will Be Required With Pot Legalized