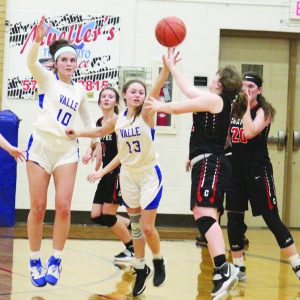 The Valle Catholic High School girls’ basketball team found a carbon copy of itself this past Thursday.

On the Missouri State High School Activities Association website, there is a tab called match-up, which takes the browser to a game preview with all sorts of statistics.

Two of those statistics are points scored and points allowed per game, and both Valle Catholic and Chaffee had been averaging 38 points while surrendering 43 per contest.

“I thought Chaffee was similar to us, so I figured it would be a challenge,” said Valle Catholic head coach Brian Bauman.

Chaffee had a little more height inside than the Warriors, so Bauman had Valle Catholic

However, Hailey Rains knocked down three 3-pointers in the first quarter, staking the Devils to a 15-8 lead with 2:33 remaining in the frame.

Valle Catholic controlled the remainder of the first half, building up a 26-18 halftime cushion. The Warriors’ performance during the second quarter, outscoring Chaffee 11-3, was arguably their best of the entire season.

Hannah Fowler scored 10 of her game-high 16 points in the first half, and Bryna Blum and Sam Loida both connected on one 3-pointer each.

Brianna Hulvey gave Chaffee perceived momentum heading into the final quarter, draining a 3-pointer on the right wing to cut Valle’s lead to 32-30 just as the buzzer sounded to end the third.

But Bauman thought there was room for improvement, from an offensive standpoint.

“We never got into a groove on offense, and they (Chaffee) took away the inside pass to Hannah (in the second half),” the coach commented.

Chaffee’s Lauren Wagoner deadlocked the score at 41-all with a pair of successful free throws before Fowler put the Warriors ahead to stay.

The Warriors continued moving on from Riley Siebert’s injury. However, Siebert was still much involved in the game — providing play by play on Valle Catholic’s Facebook Live account.