Ste. Genevieve High School head boys’ basketball coach Robert Coleman has a tradition of starting as many seniors as possible on “Senior Night.”

It serves as a reward for the players who have been with the program the longest; this year, Chaytin Lea, Landon Rose, Logan Trollinger and Anthony Nash. 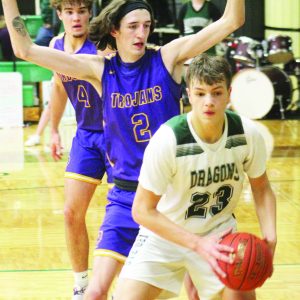 The seniors, and the rest of the Dragons, rewarded the coach with a come-from-behind 65-60 victory over Potosi in a heated, pivotal Mineral Area Activities Association Large School Division contest.

“It was a great win for our seniors on Senior Night,” Coleman said. “Those guys played well.”

Each senior fills a different role on the team.

Coleman asks Rose to be a physical presence, including blocking out. Lea continues growing, and he’s become an adroit rebounder. Nash provides the Dragons with their motor, a selfless player who sets the tempo on offense. Trollinger is a four-year starter with a dynamic in-and-out game.

In the victory over Potosi, Lea filled the statistics sheet with two points, three offensive rebounds and three steals.

They all complimented Ricky Hunter, who dropped in 29 points to lead all scorers, including four 3-pointers and 3-of-5 from the free-throw line. Aiden Boyer paced all rebounders with 13 caroms, including three on the offensive glass.

Paraphrasing, Coleman said the Dragons played a lot more zone than normal against Potosi because the Trojans had a height advantage.