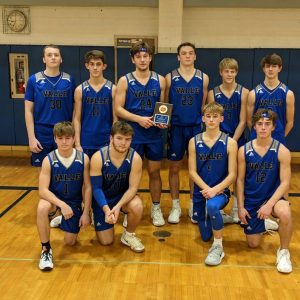 “I am proud of the way the guys fought,” Search said. “They played three games in three days, and we don’t go really deep. It was good to get to the championship game and it was a good week in all.”

“Carter is the kind of kid you want on your team,” Search said. “These kids give all they have, and I can’t thank them enough. They are both a pleasure to coach.”

Seckman primarily won the game in two areas, its depth and the way the team ran its offense.

The Jaguars played with a 10-man rotation, and they used a quick tempo offense the Warriors had difficulty slowing down.

Hoog drove inside for two points at the 4:49 mark of the fourth quarter, cutting Seckman’s lead to 53-52.

However, that’s when the bottom dropped out for Valle Catholic. Seckman then scored nine straight points, and ultimately finished the contest on a 22-7 run.

The teams were deadlocked at 29-all at intermission. Carson Tucker dropped in a 3-ball from the right wing, cutting Seckman’s lead to 43-42 with 1:53 left in the third quarter. Seckman was ahead by five points (47-42) entering the final quarter.

The Warriors pushed a Class 6 school for more than three quarters — and they received plenty of vital contributions.

Hoog distributed seven assists and Fallert six. Sam Drury swiped four steals and pulled down seven rebounds, leading the team in both categories. Harry Oliver had a career-high 14 free-throw attempts, and he blocked a pair of Seckman shots.

“I think when you see a team (as much as St. Vincent), you learn a bit about them,” Search said. “We played a little better against them this time. We didn’t turn over the ball as much, and we rebounded better. It was a good win for us.”

Hoog dropped in 23 points, including three 3-pointers and 4-of-6 from the line, and Sam Drury added a season-high 14 points.