The Warriors earned fourth out of 12 teams at the tournament, falling in the third-place game to Jefferson R-7, 46-40.

Valle Catholic power forward Riley Siebert was lost due to an unspecified injury during the Warriors’ game with DeSoto on Tuesday, Dec. 29. 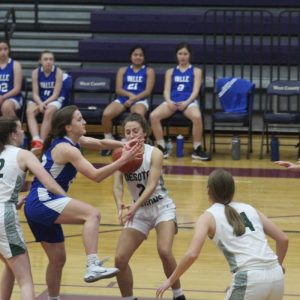 Siebert’s injury was severe enough to stop the game for nearly 45 minutes, and she was air-flighted to a metropolitan St. Louis area medical facility.

“Some of the girls on the bench had to look away, and some tears were shed,” said first-year head coach Brian Bauman.

“It was great to see them come back and play the way they did,” continued Bauman, proud of the Warriors’ effort in a 33-27 championship bracket victory over DeSoto.

The Warriors (4-7) showed plenty of character as they soldiered on without Siebert, who had been the team’s leading scorer and rebounder.

The game versus DeSoto, a Class 5 school, was transformed into a taut, defensive struggle.

Bauman implemented a mix of defenses to keep the Dragons off-balance, running both a 3-2 zone and man-to-man at times. Ade Weiler was moved to the top of the key because of her sound defensive play.

Mia Weiler spotted Fowler for a basket inside during the closing seconds of the third quarter, and the Warriors clung to a 24-20 lead over DeSoto.

However, Ade Weiler made 5-of-6 free throws during the fourth, and the Warriors eventually prevailed.

Fowler also posted game-highs of eight rebounds and four steals. Ade Weiler also had four steals, and the Warriors finished with 15 as a team. Mia Weiler dished off four assists. Bryna Blum and Emma Christine both contributed in the win as well.

Jefferson had a 27-9 lead at one point; then the Warriors went on a 23-0 run, producing a competitive contest until the Blue Jays pulled away late.